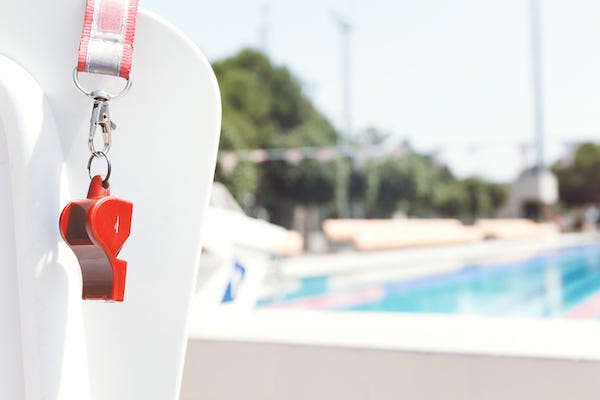 Whistle hanging on a chair near a pool Photo credit Getty Images/Ekaterina Molchanova
By Miles In The Morning, Jeff Miles, Rebekah Black, and Alex Luckey, 98.7 KLUV

Summers might be looking a little different than usual.  In fact, you might want to check that your neighborhood pool is open before taking the kids out for a swim.

According to the American Lifeguard Association, a third of public pools in the US could be forced to close this summer to due a nationwide lack of lifeguards.

Wyatt Werneth, the association’s national spokesman, said per the New York Post, “Ever since lifeguarding started, we’ve had difficulty filling the ranks because it’s a tough job to obtain.”

Lifeguard shortage could shutter a third of US public pools this summer https://t.co/fjY9OsxUpB pic.twitter.com/8EOQNEyocW

Felicia Bergan is a mother of three, and though her 11-year-old has been able to swim for a couple of years now, her two youngest cannot get over their fears of the water.

She said, “A lifeguard shortage would definitely concern me enough to change some of my behaviors.  As a parent who can’t swim at all, having a lifeguard near each part of the pool gives me piece of mind that there is a nearby person who can help my child if they are in danger.”