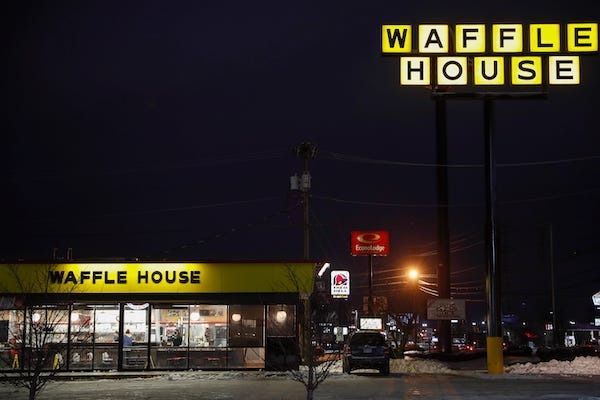 An Atlanta man named Candy Franklin was feeling a little hungry around 1:00 A.M. this past Wednesday morning, so like many of us who have craved a late-night snack, Franklin went to Waffle House.

And that was his biggest mistake of the night, because it resulted in Franklin getting a gun pulled on him...by the waitress who served him.

Apparently, Franklin ordered some cheesy eggs and he didn't get them. When he complained to waitress Angelic Patterson, he was brought only eggs, with no cheese. Well he complained again, and eventually he did get his cheesy eggs, but he also got a gun pointed in his face from Patterson who was threatening to "blow [his] brains out," according to FOX 5.

Franklin called her bluff thinking she wouldn't really shoot, but then she cocked the gun. Of course, the other patrons of the Waffle House scattered. Luckily, no shots were fired, and nobody was hurt in the incident.

‘It happened over cheese eggs’
Atlanta police are investigating after a man says waitress at Waffle House pulled a gun on him after dispute over food order. @FOX5Atlanta pic.twitter.com/sx4oUXRlLp

However, Patterson is now facing charges for aggravated assault.