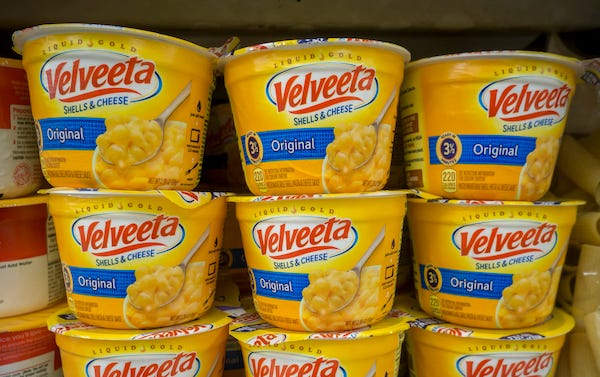 Containers of Velveeta Shells and Cheese are seen in a supermarket Photo credit Richard B. Levine
By Alex Luckey, 98.7 KLUV

A Florida woman has filed a lawsuit against Kraft Heinz Foods Company after claiming one of their Velveeta Shells & Cheese actually takes longer time to prepare than the “ready time” claims on the box.

In her suit, Amanda Ramirez alleges that the statement of “’ready in 3 1/2 minutes’ is false and misleading because the product takes longer than the 3-and-a-half minutes to prepare for consumption.”

The suit also goes on to quote the four steps to prepare the meal that are printed on the box label before alleging that the 3 1/2-minute ready time is “just the length of time to complete one of several steps,” referring to the time it takes to microwave the product after having mixed in other ingredients listed in previous steps.

The lawsuit, however, does not state the overall time it took Ramirez to prepare the cups for eating.

The $5 million class action suit states that Ramirez “believed and expected” the product would be ready to eat in a total of 3 1/2 minutes.

The Kraft Heinz Company said in an email per the NY Post, “We are aware of this frivolous lawsuit and will strongly defend against the allegations in the complaint.”