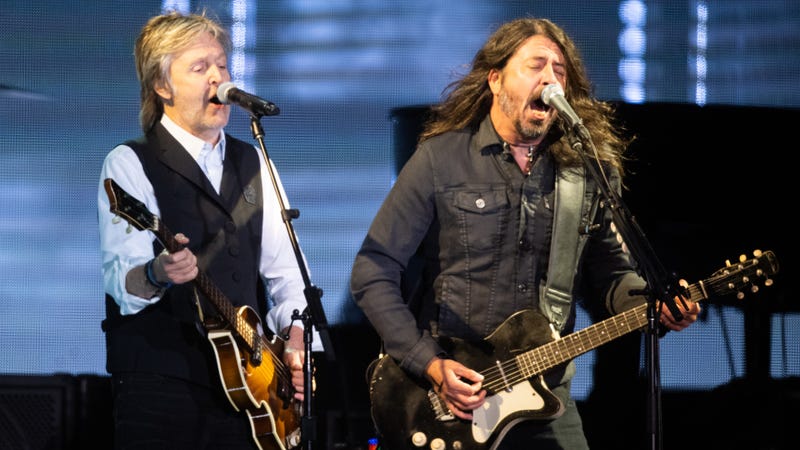 Dave Grohl took the stage at the Glastonbury Festival in the U.K. for what marked his first public performance since the death of Taylor Hawkins.

Grohl was brought up on stage to join Paul McCartney as the Foo Fighters frontman performed in front of an audience for the first time since Hawkins’ passing in late March.

“Now, I’ve got a little surprise for you,” McCartney teased the crowd. “My friend, your hero from the west coast of America, Dave Grohl!”

The pair then dug into a cover of The Beatles’ “I Saw Her Standing There” and the Wings classic “Band on the Run.” While neither McCartney nor Grohl referenced Hawkins’ passing during the set, Macca did give a sincere “love you man” to Grohl during the show.

As if that weren’t enough, McCartney then offered up another tease. “We’ve got another surprise for you, from the East Coast Of America,” McCartney said before introducing none other than Bruce Springsteen.

McCartney and Springsteen then covered The Boss’ hit “Glory Days” before segueing into a cover of The Beatles’ “I Wanna Be Your Man.”

At the end of the show, McCartney brought Grohl and Springsteen back up on stage as they appropriately serenaded the Glastonbury crowd with a rocking rendition of “The End.”

Listen To The Beatles Radio, Now on Audacy

It was a magical night on the Glastonbury stage and here at Audacy you can dive into the music of all those wonderful artists on The Beatles Radio, Bruce Springsteen Radio, and Foo Fighters Radio!