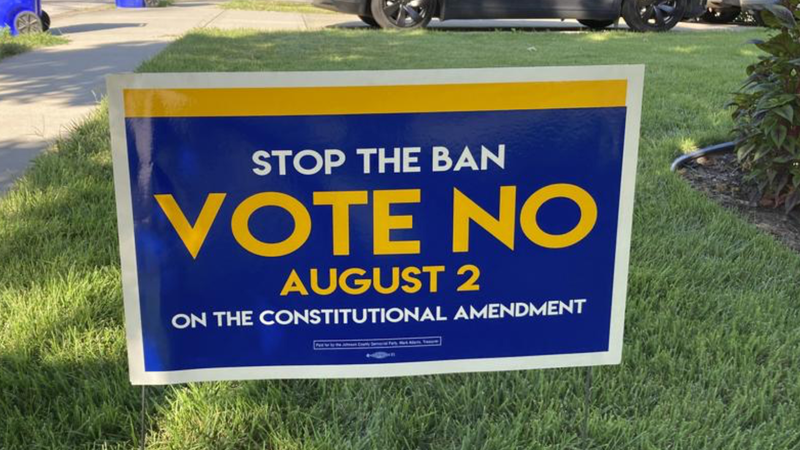 Photo credit AP Photo
By KMBZ and The Associated Press

KANSAS CITY – Kansas voters have sent a resounding message about their desire to protect abortion rights by rejecting a measure that would have allowed the Republican-controlled Legislature to tighten abortion restrictions or ban the procedure outright.

The vote Tuesday was the first test of voters’ feelings about abortion since the Supreme Court overturned Roe v. Wade in late June.

Kansas voters have rejected a constitutional amendment that would have allowed the Legislature to further restrict abortion access in the state.

The vote was the first statewide referendum on abortion since the Supreme Court overturned Roe v. Wade. https://t.co/c4Mziu46Ho pic.twitter.com/Xjy4JyjUzm

The defeated amendment proposal, had it passed, would have spelled out that the state constitution doesn't explicitly mention 'abortion' and therefore lawmakers could make whichever laws they desired around the procedure. Voters rejected that change.

Breaking News: Kansans rejected an amendment removing the right to abortion from the State Constitution, a backlash to the end of Roe v. Wade. https://t.co/yp1vmo2lDZ

The Kansas Supreme Court in 2019 ruled that the state constitution does indeed protect a woman's right to an abortion, a right that can't be overruled by state lawmakers.

Kansans stood up for fundamental rights today. We rejected divisive legislation that jeopardized our economic future & put women's health care access at risk. Together, we'll continue to make incredible strides to make KS the best state in the nation to live freely & do business.