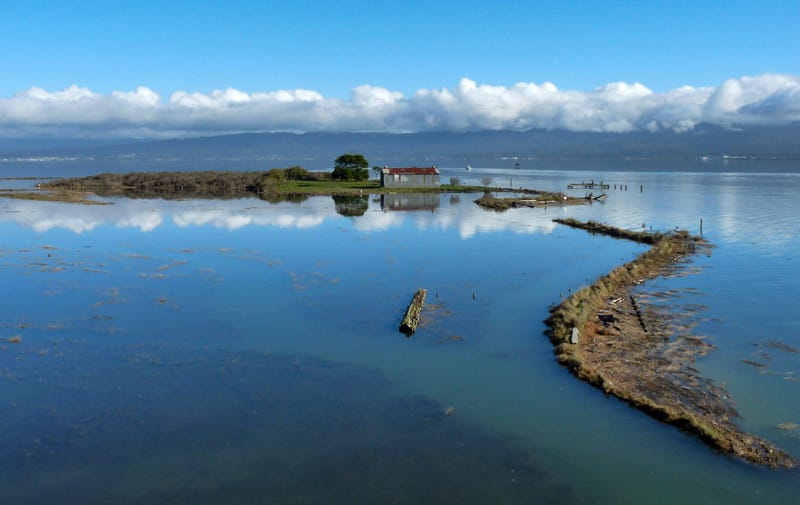 LOS ANGELES (AP) — The most vulnerable members of the Wiyot Tribe were asleep the morning of Feb. 26, 1860, when a band of white men slipped into their Northern California villages under darkness and slaughtered them.

Many of the children, women and elderly slain in what became known as the Indian Island Massacre had their eternal rest disturbed when their graves were later dug up and their skeletons and the artifacts buried with them were placed in a museum.

After nearly 70 years of separation from their tribe, the remains of at least 20 of those believed to have been killed have been returned home.

“They’re going to be at peace and at rest with our other ancestors,” Ted Hernandez, the Wiyot Tribe's historic preservation officer, said Tuesday after the repatriation was announced. “They’ll be able to reunite with their families.”

The return is part of an effort by some institutions to do a better job complying with federal law that requires giving tribes back items looted from sacred burial sites.

Grave robbing was yet another indignity suffered by Native Americans and their descendants long after they were driven from their lands or killed. Hobbyists, collectors and even prominent researchers took part in the desecration of burial sites. Skulls, bones and antiquities were sold, traded, studied and displayed in museums.

She criticized museums and universities that warehouse items that objectify Native Americans and reduce them to historical objects and artifacts rather than people.

“From a spiritual perspective, from a cultural perspective or even a human perspective, it’s hard to imagine the graves of your ancestors being dug up and then put into a museum,” Risling Baldy said. “It kind of creates a mythology around Native people that we are somehow specimens, rather than people and human beings.”

The bones of the Wiyot were recovered in 1953 after being discovered near where a jetty was constructed outside the city of Eureka, 225 miles (362 kilometers) north of San Francisco, according to a notice last year in the Federal Register.

A team from University of California, Berkeley collected the remains and put them in storage with 136 artifacts buried with them — mainly beads and ornaments made from shells, an arrowhead from a broken bottle fragment, a sinker for a fishing net, bone tools and an elk tooth.

The gravesites were where the Wiyot buried some of their dead following a devastating series of mass slayings at a dozen of their villages over the course of a week in 1860.

The unprovoked killings occurred in the midst of the tribe's World Renewal Ceremony, a 10-day peaceful celebration with food, dance and prayer to return balance to the Earth, Hernandez said.

After the ceremony, the tribe's men left for the night, paddling from the island to the mainland to hunt and fish for food and gather firewood for the next day’s feast.

In the early morning, raiders arrived by canoe across the bay and stabbed, beat or hacked the victims with knives, clubs and hatchets. Several other attacks were carried out that night, and more killings occurred over the next five days, said Jerry Rohde, a Humboldt County historian.

More than 50 people were killed on the island, and as many as 500 may have been killed in the course of the week, Rohde said. An account in the New York Times put the death toll at 188.

The group of vigilantes were dubbed the “Thugs" but never named publicly or held accountable.

A young Bret Harte, who would go on to become one of the most popular writers of the day, wrote a scathing editorial about the bloodshed in The Northern Californian, a newspaper in the city just to the north.

“When the bodies were landed at Union, a more shocking and revolting spectacle never was exhibited to the eyes of a Christian and civilized people,” he wrote.

But that was not the popular opinion in the area, Rohde said. The Humboldt Times editor had advocated for the removal or extermination of Native people. Harte fled to San Francisco after death threats.

Some of the men said to have bragged about the killing went on to be elected to the state Legislature, Rohde said.

The Wiyot began seeking return of their ancestors in 2016 under the Native American Graves Protection and Repatriation Act. The act made it illegal to steal from the graves and required government institutions to return items in their possession.

But getting those back has not always been easy.

UC Berkeley, which held the remains at the Hearst Museum of Anthropology, denied the request, citing lack of evidence, said Tom Torma, the university's repatriation coordinator.

Torma was aware of the case because he submitted the request as the Wiyot's historical preservation officer at the time.

The campus has had a racial reckoning with the past in recent years, including its history with Native Americans.

Last year, the university stripped the name of Alfred Kroeber from the hall housing the anthropology department and museum. Kroeber, a pioneer in American anthropology, collected or authorized collection of Native Americans remains for research.

He was best known for taking custody of Ishi, called “last of the Yahi," who emerged from the wilderness in 1911. The man performed as a living exhibit for museum visitors, demonstrating how to make stone tools and crafts.

The university system revised its repatriation policy, based in part on input from tribes, last year. A new committee at UC Berkeley took a more proactive approach and determined there was enough evidence to return the Wiyot items, Torma said.

The repatriation was jointly made with the U.S. Army Corps of Engineers, which was responsible for the jetty construction that may have unearthed the remains.

For the Wiyot Tribe, the repatriation last fall came two years after the island known now as Tulawat, was returned to the tribe by the city of Eureka.

It's now up to tribal elders to determine what to do with the remains, Hernandez said.

The dead are already a part of their ceremonies. When the dancing and praying is done, the sacred fires are left burning for their forebears.

“They’ll be able to continue the ceremonies in the afterlife,” Hernandez said.