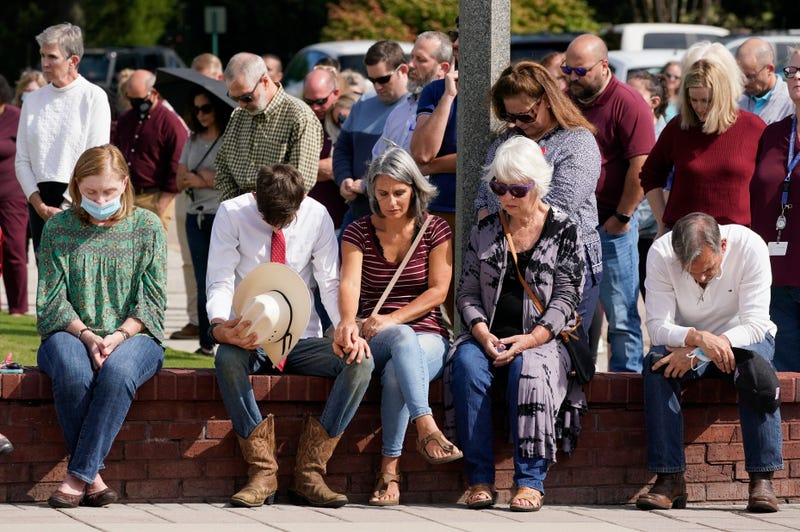 COLLIERVILLE, Tenn. (AP) — Two women who had been strangers prior to Thursday’s mass shooting at a Tennessee supermarket clenched each other’s hands and fought back tears Friday, as they gathered at a vigil to pray for healing from the previous day’s rampage at a Kroger where the shooter worked.

Hollie Skaggs and Sara Wiles happened to be running errands at the same Kroger in Collierville. A day later, after a gunman killed one person and himself and wounded 14 others, Skaggs called Wiles her guardian angel.

“It’s been a very trying last few hours,” Skaggs said, her voice trembling. “Sara and I didn’t know each other before. But now, I told her from the beginning when we came out, she’s my guardian angel. I’m just grateful for her. We ran and hid and heard everything. It was very, very traumatic. We just ask that you pray for us for peace – and sleep. That’s one thing that’s kind of hard.”

The gunman, identified by police as UK Thang, worked in a sushi business at the store and was the son of refugees from Myanmar who had settled in Nashville, a family friend said.

Police have described Thang as a “third-party vendor” who worked at the grocery store on a daily basis. He died of an apparent self-inflicted gunshot wound within a couple of minutes of officers arriving at the Kroger in the upscale suburb outside of Memphis.

The victims included 10 employees and five customers, police said. On Friday, some of the wounded were still in critical condition and fighting for their lives, Collierville Police Chief Dale Lane said at a morning news conference.

Lane identified the woman who was killed as Olivia King. Friend Maureen Fraser said King was a widowed mother of three grown sons.