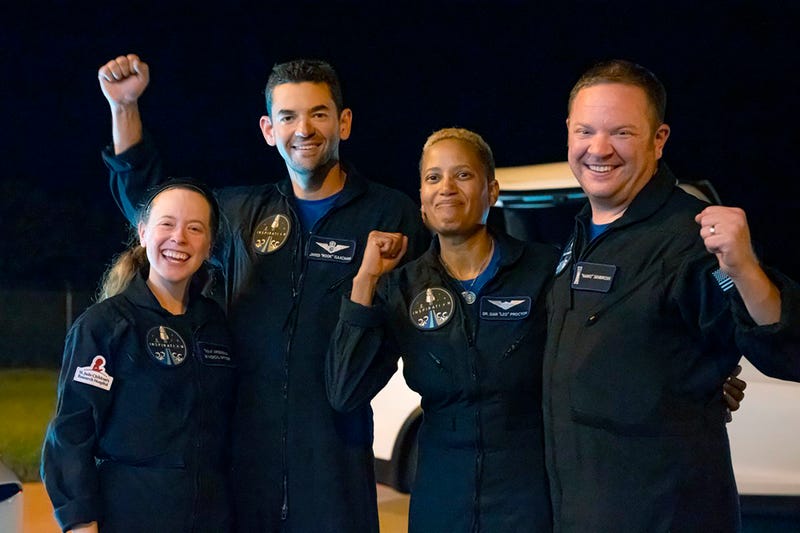 CAPE CANAVERAL, Fla. (AP) — Four space tourists safely ended their trailblazing trip to orbit Saturday with a splashdown in the Atlantic off the Florida coast.

Their SpaceX capsule parachuted into the ocean just before sunset, not far from where their chartered flight began three days earlier.

The all-amateur crew was the first to circle the world without a professional astronaut.

The billionaire who paid undisclosed millions for the trip and his three guests wanted to show that ordinary people could blast into orbit by themselves, and SpaceX founder Elon Musk took them on as the company’s first rocket-riding tourists.

“Your mission has shown the world that space is for all of us,” SpaceX Mission Control radioed.

“It was a heck of a ride for us ... just getting started,” replied trip sponsor Jared Isaacman, referring to the growing number of private flights on the horizon.

SpaceX’s fully automated Dragon capsule reached an unusually high altitude of 363 miles (585 kilometers) after Wednesday night’s liftoff. Surpassing the International Space Station by 100 miles (160 kilometers), the passengers savored views of Earth through a big bubble-shaped window added to the top of the capsule.

The four streaked back through the atmosphere early Saturday evening, the first space travelers to end their flight in the Atlantic since Apollo 9 in 1969. SpaceX’s two previous crew splashdowns — carrying astronauts for NASA — were in the Gulf of Mex