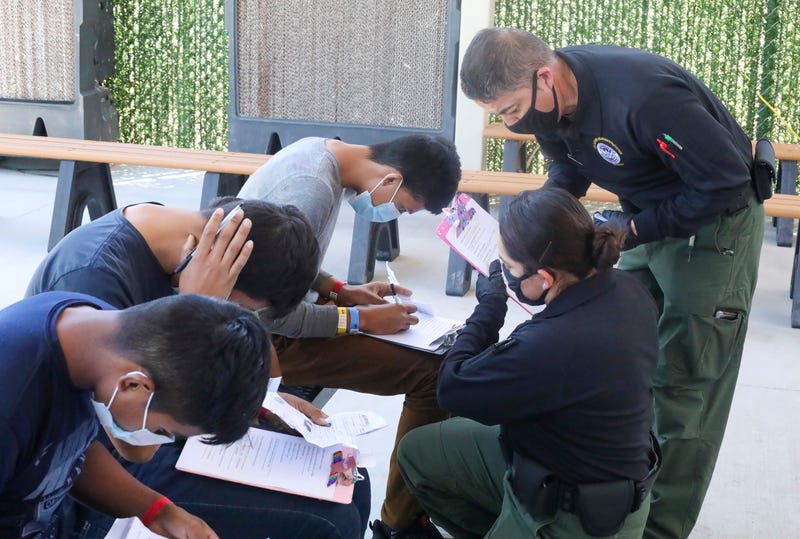 SAN DIEGO (AP) — Dozens, even hundreds, of asylum-seeking migrants often wait hours to surrender to U.S. Border Patrol agents, but the thousands of Haitians gathered at a bridge in the small Texas border town of Del Rio may be unprecedented and point to a glaring problem with the federal police agency's staffing.

Instead of conducting patrols and uncovering smuggling activity, its agents spend about 40% of their time caring for people already in custody and administrative tasks that are unrelated to border security.

The agency hopes to free up agents to go back into the field by hiring civilians for jobs like making sure microwaved burritos are served properly, checking holding cells and the time-consuming work of collecting information for immigration court papers.

The Border Patrol graduated its first class of “processing coordinators” in January, with the goal of eventually hiring 1,200. The position requires less training than for law enforcement officers and pays less. It is also seen as a recruiting tool for an agency that has struggled to find qualified applicants, particularly women.

While it’s early to know if the new employees will pan out as hoped, the hiring plan's initial reviews are generally favorable. Their skills will be in high demand as U.S. authorities respond to the Haitians who suddenly arrived in Del Rio and other large groups of new arrivals.

“This is a very, very good program. It is a very necessary program," said Brandon Judd, president of the National Border Patrol Council, a labor union representing many of the nearly 20,000 agents. "It’s a program that will allow us to get more agents in the field.”

U.S. Rep. Nanette Barragan, a Los Angeles Democrat, told the members of the second graduating class in June that they were “pioneers.” She saw the need for their skills in April while visiting a holding facility in Texas' Rio Grande Valley, the busiest corridor for illegal crossings from Mexico to the U.S.

Unaccompanied children were held at the facility for days, unable to call their parents, Barragan said. “Agents were working around the clock to process the children quickly, but they needed help,” she told the graduating class.

The need is especially acute during periodic spikes at the U.S.-Mexico border, including ones seen in 2014, 2019 and again this year. The c