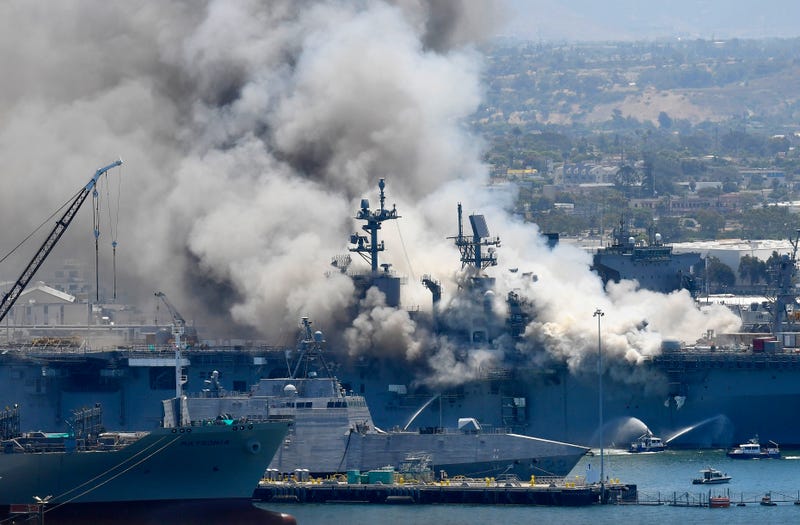 WASHINGTON (AP) — More than a year after arson destroyed a Navy warship, service leaders said Wednesday they are making changes and increasing oversight to correct widespread failures that led to the scrapping of the USS Bonhomme Richard.

“I see the loss of the Bonhomme Richard as preventable and wholly unacceptable. The Navy is taking a hard look at our shortcomings,” said Adm. Bill Lescher, vice chief of naval operations. He said it was not just “happy talk.”

A new system of unannounced inspections has begun, Lescher told reporters, and disciplinary options are being considered for what a review concluded were widespread lapses in training, coordination, communication, fire preparedness, equipment maintenance and overall command and control.

“We are serious in doing thorough analysis to understand and improve the Navy, we’re holding leaders accountable for the deviation from standards that we see, and we’re on a clear path to drive learning and correction,” he said.

A report obtained by The Associated Press on Tuesday found that while the fire was deliberately set as the 840-foot (256-meter) amphibious assault vessel was docked in San Diego for a $250 million upgrade, it was lost due to repeated failures by an “inadequately prepared crew” unable to extinguish the blaze.

Navy leaders said Wednesday that a key finding showed that Navy crews are highly capable of fighting shipboard fires while at sea and in combat, but those skills decline when ships are docked for maintenance. The Bonhomme Richard was undergoing maintenance at the time of the fire.

“Where we’ve missed the opportunity is those high-risk situations in the maintenance environment or in the pierside environment where we have reduced manning in off hours or we have equipment that is unavailable due to maintenance or equipment that has been moved,” said Rear Adm. Paul Spedero Jr., who led a broad review that studied 15 shipyard fires over the past 12 years.

As a result of the review, he said crews will now be tested, trained and certified when they go into a maintenance phase, to ensure they are aware of the safety risks and how to mitigate them.

Vice Adm. Scott Conn., who led the review into the Bonhomme Richard fire response and wrote the final report, said changes, including increased training, must be made from the commanders down to the sailors on the deck.