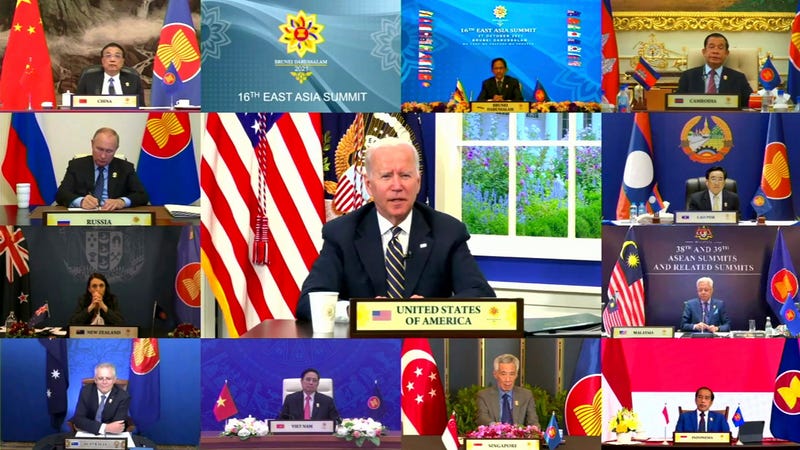 KUALA LUMPUR, Malaysia (AP) — President Joe Biden told leaders at the East Asia Summit on Wednesday that China's recent actions in the Taiwan Straits are “coercive" and undermined peace and stability in the region.

The comments by Biden, who participated by video in the annual meeting of 18 Asia-Pacific nations, come during a surge in Chinese military activity near the island that China regards as a renegade province and has vowed to reclaim by force if necessary.

“The president also reiterated the U.S. commitment to the international rules-based order and expressed concern over threats to that order,” the White House said in a statement. “He made clear that the United States will continue to stand with allies and partners in support of democracy, human rights, rule of law, and freedom of the seas.”

Last week, Biden set off alarm bells in Beijing by saying the U.S. has a firm commitment to help Taiwan defend itself in the event of a Chinese attack.

The White House later downplayed the president’s comments, which came during a CNN town hall, and said he did not mean to imply any changes in the U.S. “one-China policy,” which recognizes Beijing but allows informal relations and defense ties with Taipei.

Relations between Washington and Beijing have plunged to new lows since nosediving under former President Donald Trump's administration, which adopted a confrontational approach on trade, visas, diplomatic representation and educational exchanges.

A U.S. nuclear submarine deal with Australia and the U.K. has also angered China, which claims most of the disputed South China Sea and warned the pact would threaten regional stability.

Some nations such as Indonesia and Malaysia also fear the pact could escalate tensions and spark an arms race.