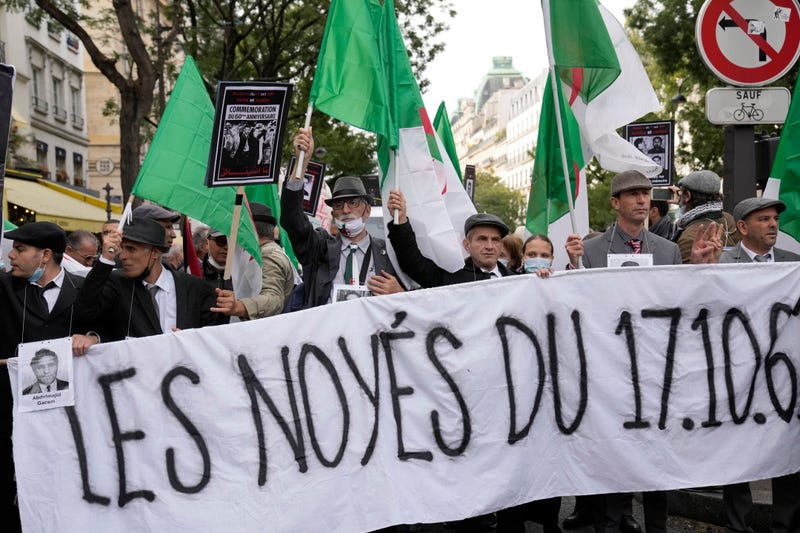 PARIS (AP) — Hundreds of people, including Algerian protesters and their descendants, on Sunday commemorated the 60th anniversary of a bloody police crackdown in Paris during the final year of Algeria's independence war with its colonial power.

The tribute march was organized in Paris to honor the victims of the Oct. 17, 1961 massacre of Algerians — which French authorities have sought to cover up for decades.

The commemoration comes after French President Emmanuel Macron acknowledged that “crimes” committed that day were “inexcusable for the Republic.” The move was part of steps taken by Macron to address France’s brutal history with Algeria, which had been under French rule for 132 years until its independence in 1962.

Protesters in 1961 had answered a call for a peaceful demonstration by the French branch of the National Liberation Front (FLN), which was fighting for Algerian independence, against a discriminatory nighttime curfew targeting Algerians in the Paris region.

“The repression was brutal, violent, bloody” under the orders of Paris police chief Maurice Papon, Macron said in a statement released Saturday. About 12,000 Algerians were arrested and dozens were killed, “their bodies thrown into the Seine River,” the statement said.

Historians say at least 120 protesters died, some shot and some drowned, according to Macron's office. The exact number has never been established as archives remain partially closed.

Papon later became the highest-ranking Frenchman convicted of complicity in crimes against humanity for his role in deporting Jews during World War II.

Ahmed Toul was 13 when he went to the protest with his older brother “well-dressed as the FLN told us, wearing suit and tie.” They wanted “the entire world” to know "that Algerians living in France want independence,” he told The Associated Press during the Paris march on Sunday.

“The police were full of rage... That’s why ther