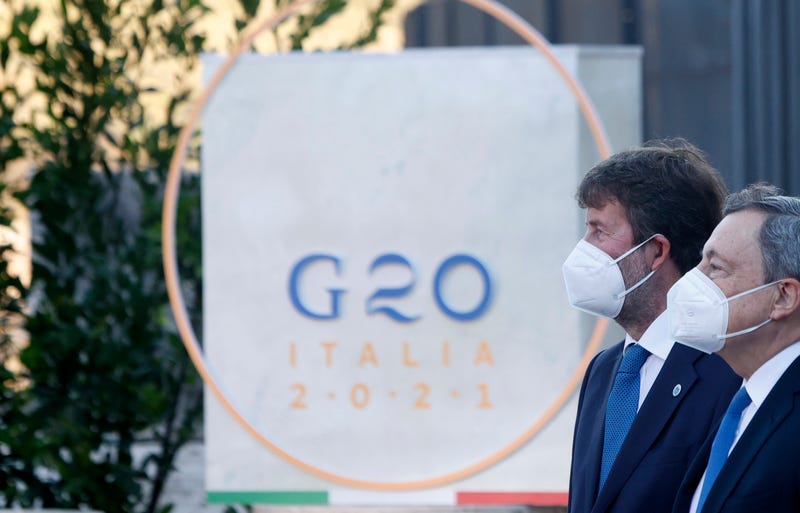 ROME (AP) — The leaders of Russia and China aren’t coming. Turkey nearly set off a diplomatic incident on the eve of the meeting. And the United States, Australia and France will be at the same table for the first time since Washington pulled the rug out from under Paris’ $66 billion submarine deal Down Under.

A Group of 20 summit scheduled for this weekend in Rome - the first in-person gathering of leaders of the world’s biggest economies since the COVID-19 pandemic started - is not business as usual. That’s especially true since as soon as the event ends, a bigger United Nations summit devoted to climate change begins in Glasgow, Scotland.

In many ways, the two-day G-20 meeting is serving as a Roman holiday preamble to the 12-day Glasgow summit, with the climate dossier taking center stage at the new Nuvola (Cloud) convention center in the Italian capital's Fascist-era EUR neighborhood.

Some of the participating presidents and prime ministers met at a COVID-focused Group of Seven summit in July, and some passed one another in the U.N. hallways during the General Assembly in New York last month. But this is the first time the leaders of countries that account for 75% of global trade and 60% of the world's population will be meeting as a group after nearly two years of virus-induced lockdowns.

While economic recovery is a top agenda item, host Italy hopes the leaders will set a shared, mid-century deadline to reach net-zero greenhouse gas emissions and explore a commitment to reduce methane emissions as well.

The United Nations and climate activists also want the G-20 countries to fulfill their longtime pledges of providing $100 billion a year in climate aid to help poor nations cope with the impacts of global warming.

“G-20 members are responsible for over 80% of global emissions. So there is a responsibility when they come together as a group to think about the promise of $100 billion in annual climate financing that is not being met,” said Renata Dwan, deputy director of the international affairs think tank Chatham House.

But what can be achieved if the leader of China, the world’s No. 1 carbon polluter and No. 2 economy, doesn’t show up in Rome?