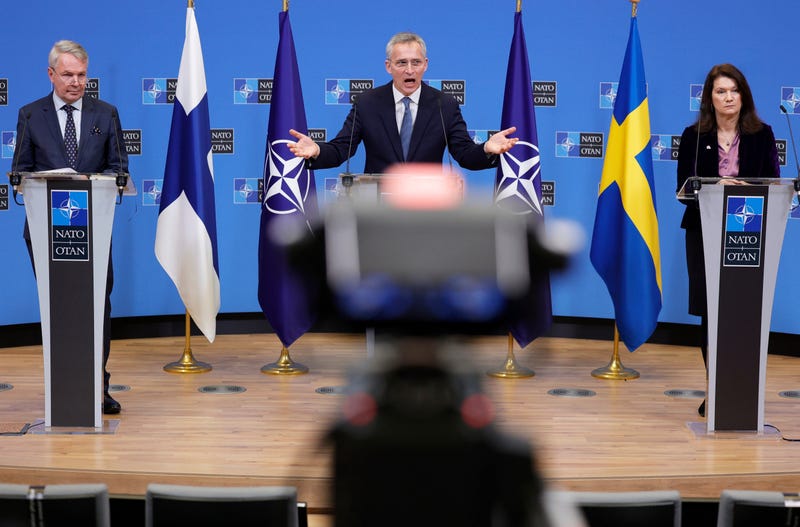 BRUSSELS (AP) — NATO is right back in its element. As tensions mount with Russia, the world’s biggest military organization is focused on security: defending the territory of its 30 member countries. That involves deterring any attempt to destabilize countries on its eastern flank like Estonia, Latvia, Lithuania and Poland.

Founded in 1949, the North Atlantic Treaty Organization was laser-focused on the Soviet Union during the Cold War, and dealing with Moscow is in its DNA. Indeed, the dispute with Russia over Ukraine is almost a relief after the debacle in Afghanistan, which the Taliban overran after NATO left last year.

NATO takes its decisions unanimously and every country has a veto. So NATO as an organization will not supply arms to Ukraine, even though many of its members are doing to, including the United States, Britain, Turkey and the Baltic countries.

Germany is the biggest member country that isn’t sending offensive weapons, but it’s not alone, and Berlin is nevertheless providing non-lethal equipment.

NATO also will not send troops into Ukraine if Russia invades.

Article 5 of its founding treaty — the key mutual defense clause — obliges all member countries to come to the aid of another member whose sovereignty or territorial integrity might be under threat.

Ukraine, however, is not a member, much as it would like to be. It has contributed to NATO operations and missions in Bosnia-Herzegovina, Kosovo, Iraq, Afghanistan and elsewhere, but this is not enough to warrant the protection of NATO’s shield.

Irrespective of Putin’s insistence that Ukraine must never become a NATO member, the alliance's members also would not admit it in at the moment, not while Russia holds the Crimean Peninsula and fighting continues in the eastern Donbas region. Article 5 obligations could start a war if it did, as Ukraine would probably insist on joining with its territory intact, Crimea and the Donbas included.

In the meantime, NATO is helping Kyiv to thoroughly reform its security and defense sector.

What NATO will do should Putin cross its red line is reinforce its own members’ defenses in the Baltic countries, Poland, and in the Black Sea area, near Bulgaria and Romania. As for what that red line is, that's unclear — it might be as little as a cyberattack or an artillery strike on Ukraine, or it might require an all-out invasion.

NATO began beefing up its defenses in northeastern Europe after Russia annexed Crimea in 2014. It now has around 5,000 troops and equipment stationed there. But it also plans to send troops, aircraft and warships to the Black Sea region. France, the Netherlands and Spain are among those taking part.

The Pentagon has put up to 8,500 U.S. troops on heightened alert, so they will be prepared to deploy if needed to reassure other allies in the event of an attack. Those troops would be attached to the NATO Response Force, a 20,000-strong force with land, air, sea and special forces components.

A quickly deployable land brigade of around 5,000 troops, currently run by France, has already been beefed up. Germany, Poland, Portugal and Spain are also contributing to this outfit, known as the Very High Readiness Joint Task Force.

In an effort to ward off an attack, NATO has extended the offer of wide-ranging talks to Moscow. It wants to improve communications, examine ways to avoid military incidents, set up a civilian hotline for emergencies and discuss missile deployments. But it refuses to halt the admission of new members.

Certainly, NATO has had its share of disputes recently. Among them are former U.S. President Donald Trump’s threat not to defend allies with insufficient defense budgets; Turkey’s purchase of Russian-made missile defense systems; French President Emmanuel Macron’s claim that NATO was suffering “brain-death”; and the chaotic U.S.-run exodus from Afghanistan after 18 years which handed victory to the Taliban.

But NATO has mostly weathered these storms — as well as major disputes in the past over the Iraq war or France’s decision to leave some of NATO’s structures and force its headquarters to move to Belgium — through its mutual defense guarantee that an attack on one ally is an attack on them all.

It's unclear what Putin will do with Ukraine, or when. What does seem clear is that NATO will be sure to protect its own.