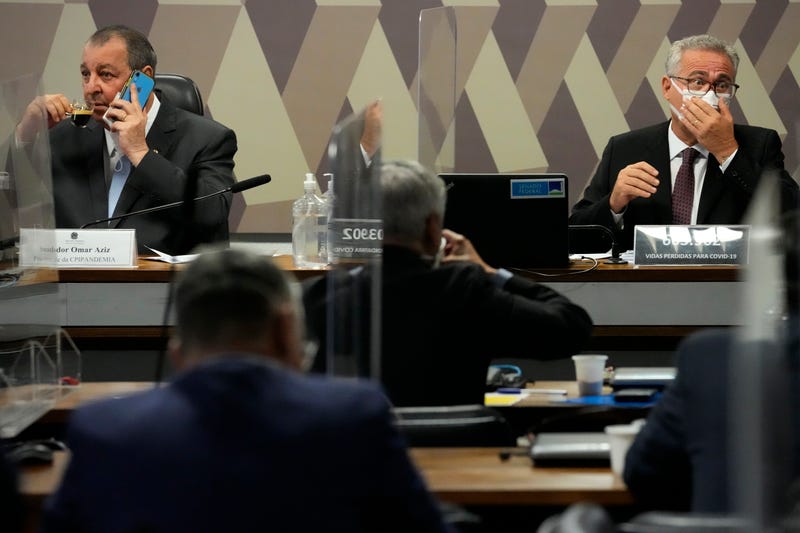 BRASILIA, Brazil (AP) — A Brazilian Senate report recommended Wednesday pursuing crimes against humanity and other charges against President Jair Bolsonaro for allegedly bungling Brazil’s response to COVID-19 and contributing to the country having the world's second-highest pandemic death toll.

Sen. Renan Calheiros presented the proposal to a committee of colleagues that has spent six months investigating the Brazilian government’s management of the pandemic. The decision on whether to file most of the charges would be up to Brazil’s prosecutor-general, a Bolsonaro appointee and ally.

Bolsonaro has consistently downplayed the threat of the coronavirus and touted misinformation and unproven COVID-19 treatments while ignoring international health guidelines on mask use and public activity. The 11-member Senate panel examined whether his actions caused many of Brazil’s more than 600,000 COVID-19 deaths.

In a nearly 1,200-page report based on the committee's work, Calheiros called for Bolsonaro's indictment on charges ranging from charlatanism and inciting crime to misuse of public funds and crimes against humanity.

By insisting on so-called early treatment drugs like the anti-malarial medication hydroxychloroquine as “practically the only government policy to fight the pandemic,” the report states, “Jair Bolsonaro strongly collaborated for COVID-19′s spread in Brazilian territory and, as such, showed himself to be the main person responsible for the errors committed by the federal government during the pandemic.”

The far-right Brazilian leader has repeatedly described the Senate investigation as a political instrument aimed at sabotaging him and denied any wrongdoing.