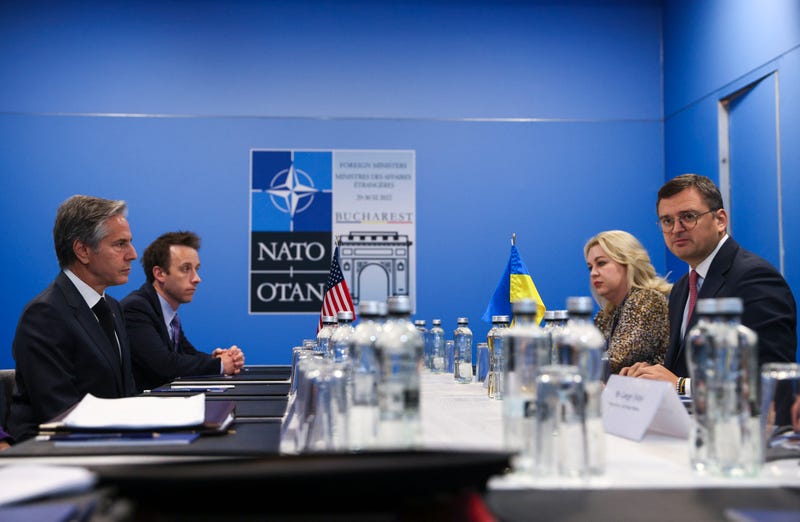 BUCHAREST (AP) — U.S. Secretary of State Antony Blinken on Wednesday condemned Russia’s weeks-long assault on Ukraine’s power grid and other infrastructure as an attempt to “freeze and starve” its people, with the war-torn country's foreign minister renewing a call for advanced missile systems.

Blinken spoke after a meeting with his NATO counterparts in Bucharest, Romania devoted in part to coordinating aid to keep the lights — and furnaces — on in Ukraine, where Russian strikes have damaged much of the country’s electrical infrastructure.

“Russia has bombed out more than a third of Ukraine’s energy system. Plunging millions into cold, into darkness as frigid temperatures set in. Heat. Water. Electricity. For children, for the elderly, for the sick. These are President (Vladimir) Putin’s new targets. He’s hitting them hard," he said.

Ukrainian Foreign Minister Dmytro Kuleba has underscored that his country's biggest needs now are electrical gear and more advanced air-defense systems than it has so far received from the U.S. and other allies, to stop Russia from bombing its grid in the first place.

“The best way to help the Ukrainian energy system is to provide both spare parts to restore (the) energy system and air defense systems and ammunition to defend Ukraine’s energy system from further missile terror conducted by Russia,” Kuleba said.

Heading into a one-on-one session with Blinken on the sidelines of the NATO gathering, Kuleba said that Ukraine at the session had received “a number of commitments, new commitments, from various NATO members with regard to providing Ukraine with more defensive weapons and energy equipment.”

But he declined to answer questions about whether that included promises of badly wanted Patriot missile batteries, from the U.S. or any other ally. Kuleba did say, however, that Ukraine would take German Patriots, if those Berlin has offered to Poland can be spared.

The provision of Patriot surface-to-air missiles to Ukraine would mark a major advance in the kinds of air defense systems the West is sending to help the war-torn country defend itself from Russian aerial attack. Talk of it has already angered Moscow.

“If Germany is ready to provide Patriots to Poland, and Poland has nothing against handing these patriots over to Ukraine, then I think that the solution for the German government is obvious,” Kuleba told reporters.

“We are ready to operate them in the safest and efficient and most efficient way. And once again, I would like to reiterate that this is a purely defensive weapon. We will be working with the German government on this particular issue next time,” he added.

German Chancellor Olaf Scholz said Tuesday that his country’s offer to send Patriots to Poland remains on the table, despite Warsaw’s suggestion that they should go to Ukraine instead.

Ukraine does not have personnel trained to used Patriots — a complicated air defense system of which there are three main types, with varying ranges and altitudes. Germany has lent them to Slovakia and Turkey but sent its own technicians to operate the missiles.

NATO allies would almost certainly refuse to send any military personnel into Ukraine, to avoid being dragged into a wider war with nuclear armed Russia. They would also want guarantees that Ukraine would only use the missiles to defend its air space and not fire them into Russian territory.

NATO Secretary-General Jens Stoltenberg has confirmed that deliveries of such sophisticated surface to air missiles systems are under consideration among some allies. The military organization does not possess any weapons, only its member countries do.

A senior U.S. defense official who briefed Pentagon reporters on Tuesday, on condition of anonymity, said that the United States is open to providing Patriots. While Ukraine has asked for the system for months, the U.S. and its allies have been hesitant to provide it to avoid further provoking Russia.

Russia is deeply opposed to the move. Dmitry Medvedev, deputy chairman of the Russian Security Council, said Tuesday on his Telegram channel: “If, as Stoltenberg hinted, NATO supplies the Kyiv fanatics with Patriot complexes along with NATO personnel, they will immediately become a legitimate target of our armed forces.”