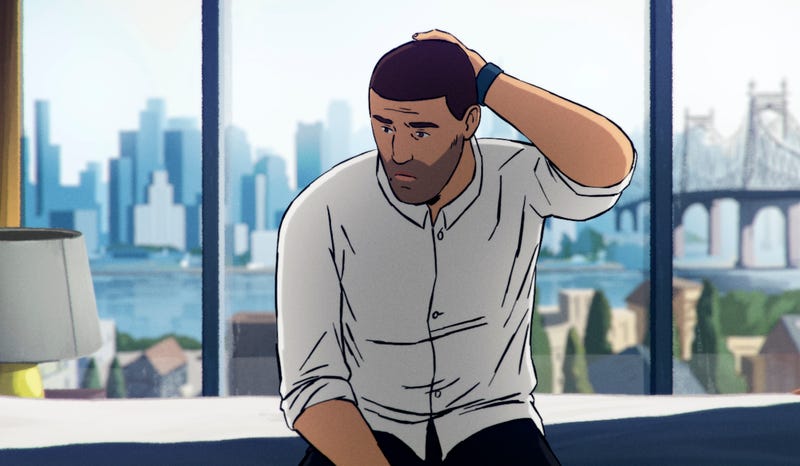 NEW YORK (AP) — Jonas Poher Rasmussen was 15 when a boy his same age arrived alone in his small Danish town.

“He arrived all by himself and stayed with a family just around the corner from where I lived,” says Rasmussen. “We met at the bus stop every morning going to high school and we became very good friends. Even then I was curious how he and why he had gotten to the village, but he didn’t want to talk about it.”

It would be a long time before Rasmussen's friend was prepared to tell his story to him, or anyone else. About 15 years ago, Rasmussen, who by then was in radio, asked about making an audio documentary of his story. He wasn't ready. But eight years ago, when Rasmussen was in a program that paired documentary filmmakers with animators, he asked again. This time, his friend was finally ready to talk about his family fleeing war-torn Kabul, Afghanistan, in the 1980s.

“What you see in the film, what you hear in the film, is the first time he’s shared the story,” says Rasmussen. “Its really difficult for him to talk about.”

“Flee,” which opened in select theaters Friday and expands in coming weeks, uses animation to vividly capture Rasmussen's friend's story. Speaking anonymously under the name Amin, he relates to Rasmussen a five-year odyssey that stretches from Afghanistan to the Soviet Union to Scandinavia. It's a documentary that gives vivid shape to Amin's life and to the harrowing plight of migrants. And it's a film about sharing a secret — a past that Amin doesn't want to be defined by (in present day, he's a successful academic in a loving relationship with his fiancé Jasper) but that he feels reluctantly compelled to share. It's a testimony.

In pairing a painful true tale with colorful animation, “Flee” follows in the recent tradition of films like Israeli filmmaker Ari Folman's “Waltz With Bashir” and “Tower," about a 1966 campus shooting, to intimately render a kind of story usually only filtered through blunter mediums like journalism and traditional documentary. And it's made “Flee” one of the most acclaimed films of the year. After first premiering at the Sundance Film Festival, where it won best documentary, “Flee” has picked up honors from the Gotham Awards, the New York Film Critics Circle and the National Board of Review. It's Denmark's submission to the Academy Awards, where it will potentially vie for best animated film, best documentary and best international film.

Rasmussen originally set out to make a 20 minute short. But what began hesitantly as a small project of therapy has grown into a global arthouse sensation.

“I’m certain Amin didn’t expect to share it with this many people," Rasmussen said smiling, in an interview during a recent trip to New York. "I didn’t either.”

Rasmussen, 40, was learning the movie's hybrid craft as he went, with animation director Kenneth Ladekjaer. The animation includes scenes of him and Amin talking. It's filled with moments where Amin, often lying down with his eyes closed, slows to summon the courage to psychologically retrace his steps. While the animation can be dazzlingly evocative, to Rasmussen, it's most significant in how it helps you listen, without distraction, to Amin's experience.

“We’re exposed to so many stories in the news and in our feeds of people struggling. You have to block things out because if you didn’t, you’d lay in bed all day. But because you have the animation in between, it kind of frees you up to listen to what’s actually being said and you take it in more,” says Rasmussen. “There’s something about hearing a real voice, a real human voice, with animation on top. Maybe it also has to do with animation being something you’re used to as a child.”

“Flee” also took on larger significance. When a wave of migrants from Syria and other countries came to Europe in 2015, a crisis seized Europe. Denmark sometimes took a hard line with refugees and tightened immigration policies. Earlier this year, it became the first European country to revoke asylum status for some Syrian refugees, telling them Syria was safe enough to return to now.

“I started out wanting to do a story about my friend," says Rasmussen. “Then the refugee crisis hit in Denmark and Europe in 2015. I felt the need to give refugees a human face.”

Still, that face — Amin — remains only a general cartoon. Amin is happy to preserve his anonymity, Rasmussen says, even while he's gratified by the film and how it's resonated for others. Amin, the director says, can this way go about his life and have control over when he talks about his past.

But “Flee” has wide echoes beyond the individual story it tells. For Rasmussen, it taps into a profound and universal human experience, including that of his own ancestors. His grandmother's family, Russian-Jewish refugees, took much of the same route taken by Amin's family.

"They fled from Russia through the Baltic Sea to Denmark, where she was born in a hotel. Then they applied for asylum, but they got rejected. They moved on to Germany. My grandmother grew up in Berlin. In school, she had to stand up with a yellow star on her chest, and then she had to flee again,” says Rasmussen. “This is something that can happen to anyone, anywhere around the world.”