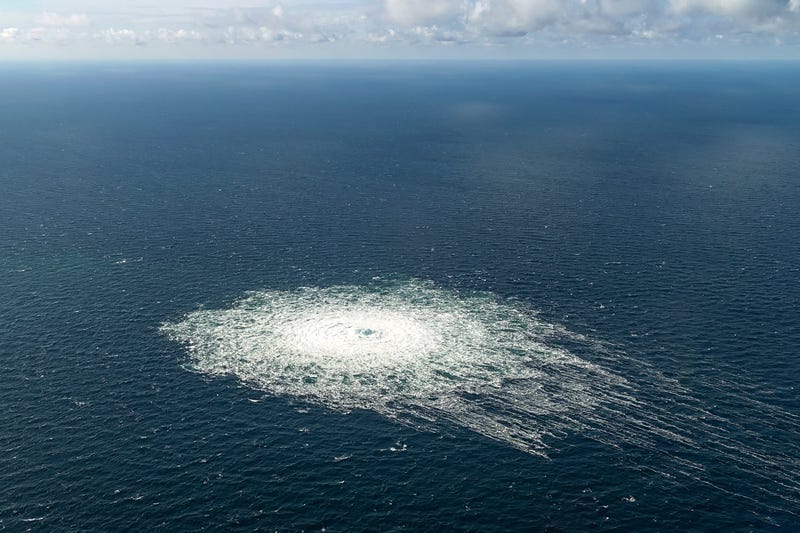 BRUSSELS (AP) — European companies are ramping up security around pipelines and energy prices are climbing again as the suspected sabotage of two pipelines that deliver natural gas from Russia underscored the vulnerability of Europe’s energy infrastructure and prompted the EU to warn of possible retaliation.

Some European officials and energy experts have said Russia is likely to blame for any sabotage — it directly benefits from higher energy prices and economic anxiety across Europe — although others cautioned against pointing fingers until investigators are able to determine what happened.

Russia has sharply curtailed natural gas shipments to Europe in retaliation for sanctions that the West put in place after its invasion of Ukraine. On Wednesday, Russian energy giant Gazprom increased the pressure, threatening on Twitter to cease dealing with a Ukrainian company that controls one of the two remaining pipelines that ship Russian gas to Europe.

Coming on top of the apparent sabotage to the Nord Stream gas pipelines, “that means a major escalation and readiness to escalate,” said Agata Loskot-Strachota, senior fellow in energy policy at the Center for Eastern Studies in Warsaw.

Seismologists say explosions rattled the Baltic Sea before unusual leaks were discovered Tuesday on the two underwater pipelines running from Russia to Germany.

“All available information indicates those leaks are the result of a deliberate act,” EU foreign policy chief Josep Borrell said in a statement on behalf of the bloc's 27 members. “Any deliberate disruption of European energy infrastructure is utterly unacceptable and will be met with a robust and united response.”

Three leaks were reported on the Nord Stream 1 and 2 pipelines, which were filled with natural gas but not delivering fuel to Europe ever since Russia stopped the flow to apply economic pressure on the continent.

Kremlin spokesman Dmitry Peskov said allegations that Russia would have sabotaged its own pipelines were “predictable and stupid.”

Yet as fears of further disruptions loomed, European energy companies and governments said Wednesday they have already begun to fortify energy infrastructure.

Norwegian state oil company Equinor said it raised the level of preparedness on all of its facilities, according to national broadcaster NRK. Norway’s energy exports have surged as European countries scramble to find alternatives to Russian supplies.

Before the pipeline leaks discovered Tuesday, natural gas prices in Europe had dropped from their all-time peak in late August because countries have filled storage facilities to 87% of capacity ahead of winter, when demand for the fuel soars to heat homes and generate electricity.

But Europe’s natural gas prices have spiked about 14% since the pipeline ruptures rattled nerves about energy security.

Natural gas prices are roughly three times higher than just before Russia invaded Ukraine. An energy crisis driven by the war is threatening rationing, business closures and recession in Europe. The continent’s ability to get through winter will be deeply affected by how cold it is and whether they can find supplies to make up for what’s been lost from Russia.

Another major source of Russian income – oil – has fallen sharply in price from June peaks of over $120 per barrel. On Wednesday, Brent crude futures traded at $87.40 per barrel, up more than 5% since Monday.

The extent of the pipeline damage, along with the political ramifications, raises serious doubts about the future of the Nord Stream project, which was launched so that Russia could deliver gas directly to Germany. The project has been heavily criticized by the West because it only increased Europe’s reliance on Russian gas imports.

The head of the Danish Energy Agency, Kristoffer Böttzauw, said Wednesday it wasn't clear when it would be safe for investigators to examine the damaged pipes, which he said are made of 12 centimeter (5 inches ) thick steel coated with concrete. The pipelines lie on the seabed between 70 and 90 meters (230 feet and 295 feet) deep.

Sweden's domestic security agency said Wednesday it was investigating the pipeline ruptures and that it couldn't be ruled out "that a foreign power is behind it.”

Polish Foreign Minister Zbigniew Rau was more direct, suggesting Tuesday that the leaks could be part of Russia’s campaign to apply pressure on the West for supporting Ukraine.

“The explosions took place very close to Danish territorial waters, but not inside them, because that would have meant NATO territory,” Rau said during a discussion at the Center for Strategic and International Studies in Washington.

“This could mean that someone is trying to intimidate the countries of the Baltic Sea," he said.

The U.N. Security Council has scheduled an emergency meeting Friday afternoon at Russia’s request to discuss the suspected pipeline sabotage.

Even with eyes turning toward Russia, Anders Puck Nielsen, a researcher with the Center for Maritime Operations at the Royal Danish Defence College, said that it would be hard to establish who is responsible, and just as tough to prevent similar incidents.

“We have pipelines, we have communication cables like the internet. We have just power lines running on the seabed. All of this is vulnerable and our societies are very dependent on it. And it’s very, very difficult to monitor what’s going on and to prevent a case of sabotage,” he told The Associated Press.

A spokesman for German Chancellor Olaf Scholz declined to respond to media reports that the CIA had warned Germany earlier this summer that the pipelines could be attacked. “But let me say that according to our findings, there is no evidence that there is a natural cause for the pressure drop in the pipelines,” spokesman Steffen Hebestreit told reporters.

Simone Tagliapietra, an energy policy expert at Bruegel, said Russia's latest threat to disrupt natural gas that flows through Ukraine is not having as much impact as it might have hoped.

“Its announcements are now having lower impact on prices, as both market and governments have internalized and got prepared for a full interruption of Russian gas to Europe,” Tagliapietra said.