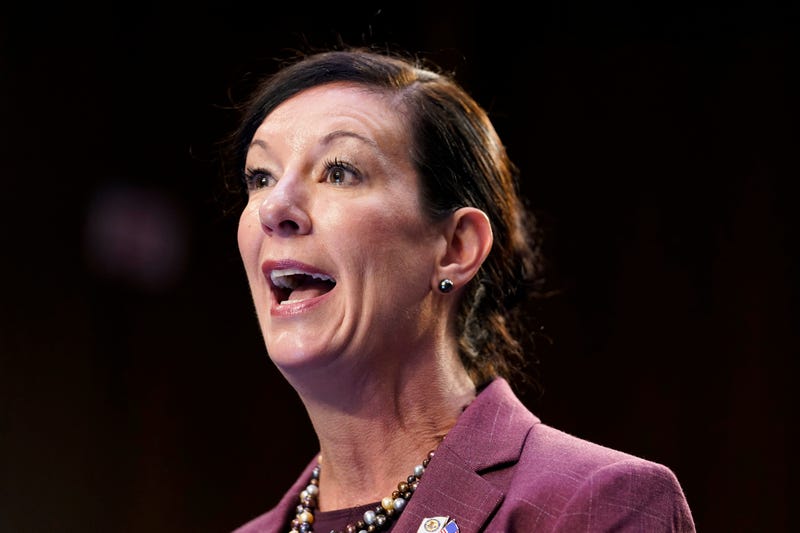 WASHINGTON (AP) — The new director of the federal Bureau of Prisons vowed Thursday that “the buck stops with me” when it comes to fixing the crisis-plagued agency, ticking off a list of top priorities, from solving a staffing crisis to ending widespread misconduct.

Colette Peters' testimony before the Senate Judiciary Committee — the first time she’s appeared before Congress — was a stark departure from the combative nature of her predecessor, who drew bipartisan rebukes for foisting blame on others and refusing to accept responsibility for the agency's problems.

Peters, who started in August, said the troubles she inherited have eroded trust in the agency among staff, inmates and the public. She cautioned that it'll take time to turn around the Justice Department’s largest component, with 122 facilities, 159,000 inmates and a budget of more than $8 billion — but that it must be done.

“These individuals in our care have the right to feel safe when they are incarcerated with us,” Peters told The Associated Press after testifying. "So we’re going to do everything we can to ensure their safety.”

The Bureau of Prisons has been under increasing scrutiny from Congress amid myriad crises, many of them exposed by AP reporting, including rampant sexual abuse of inmates by staff and other staff criminal conduct, chronic understaffing hampering emergency responses, escapes and deaths.

Peters, previously the director of Oregon’s state prison system, was brought in to run the Bureau of Prisons as a reform-minded outsider. Unlike past directors who worked their way up the ranks, she'd never been a federal prison employee before taking the top job.

Peters said she wants people to come out of prison better than they went in, telling senators, “Our job is to make good neighbors, not good inmates."

Currently, though, the federal prison system isn't always putting former inmates in a position to succeed, advocates say. Because of staffing shortages, inmates aren't always able to take classes and access other programming that could help them on the outside. Some inmates eligible for early release under the First Step Act — a bipartisan criminal justice overhaul measure signed during the Trump administration — have been left to languish while paperwork piles up for overworked, understaffed case managers, advocates say.

In the weeks since Peters took charge of the Bureau of Prisons, she has made changes to the system's organizational chart that she said will improve communications between its headquarters and its 122 facilities. Other changes include hiring of 40 additional internal affairs staff, which she said will improve handling and address a backlog of misconduct investigations.

Peters said the agency has been conducting what it terms cultural assessments of its facilities, starting with its women’s prisons, like the one in Dublin, California, where a former warden and four workers were charged with sexually abusing employees. Based on those findings, the agency is making sure workers are trained in gender responsiveness and trauma-informed care, said Peters, who visited the Dublin prison this month.

She also promised to visit another problem prison: the Atlanta federal penitentiary that has been overrun with misconduct and corruption and was the subject of a July hearing of the Senate’s Permanent Subcommittee on Investigations.

At the same time, Peters must figure out a way to solve the agency's severe staffing shortage and shore up crumbling infrastructure.

With many vacant positions, prisons have been using cooks, teachers, nurses and other workers to guard inmates, raising questions about whether the agency is keeping prisoners and staff safe and keeping up with programming and classes, as required by law.

Peters said the makeshift staffing practice, known as augmentation, should only be used in true staffing emergencies, not as a permanent fix for dwindling guard ranks. Peters, expressing concern for employee wellness, said the agency's increased reliance on overtime and augmentation during the COVID-19 pandemic has only exacerbated “wear and tear” on prison workers.

But augmentation might not be going away any time soon, with attrition only accelerating the agency's staffing decline and hiring efforts — including career fairs, increased marketing and new recruitment strategies honed by an outside consultant — unable to keep up.

About 3,000 workers retired from the Bureau of Prisons last year and another 3,000 are expected to head for the door this year, Shane Fausey, the president of the federal correctional workers union, told the Judiciary Committee.

Peters also faces other challenges, including modernizing facilities that are rotting with mold or literally falling apart. Others are in dire need of HVAC upgrades and other structural repairs. All told, the agency is facing a $2 billion infrastructure deficit, Peters said.

Responding to an array of questions about the AP's reporting on rampant sexual abuse at a women's prison in California, Peters vowed to continue to prioritize allegations of staff misconduct and encouraged those who see wrongdoing to bring it forward. The Justice Department is also pushing for additional prosecutions and harsher penalties for prison workers who sexually abuse inmates.

Peters said the agency must “create an environment where people feel comfortable coming forward” as whistleblowers — where inmates are free to speak up without retaliation and employees understand that they have an obligation to report wrongdoing.

Peters agreed without hesitation when Sen. Jon Ossoff, D-Ga., asked if “the buck will stop with you” and if she will bear “personal and ultimate responsibility for what happens” at the agency.

Peters reiterated that afterward, telling the AP: “The buck stops with me. It’s important that I understand what’s happening inside our organization.”

The AP reported in February that whistleblower employees said they were being bulled by high-ranking prison officials, while inmates alleging abuse were being sent to solitary confinement or transferred to other prisons to silence them.

A bill introduced Wednesday would require the Justice Department to hire an ombudsman to field and investigate such complaints. The measure has support from a broad coalition of prison stakeholders, including Fausey's union.

“A safe work place is a safe place for offenders to live. We have a common goal. Unfortunately, the Bureau of Prisons is a very large bureaucracy. If you do not maintain an independent avenue for oversight, a bureaucracy will abuse itself and I think the bureau has gotten to that point where they can’t help themselves," Fausey said.

Durbin, whose been a sharp critic of the Bureau of Prisons and its former director, Michael Carvajal, came away impressed with Peters, telling her: “A-plus. You did very well.”

Durbin said in an interview with the AP that Peters “has the right attitude about bringing a new generation of leadership to the Bureau of Prisons."

“She has her hands full," Durbin said. "I want to be supportive of her in the administration. But I also want to hold them accountable.”

On Twitter, follow Michael Sisak at twitter.com/mikesisak and Michael Balsamo at twitter.com/MikeBalsamo1 and send confidential tips by visiting https://www.ap.org/tips/