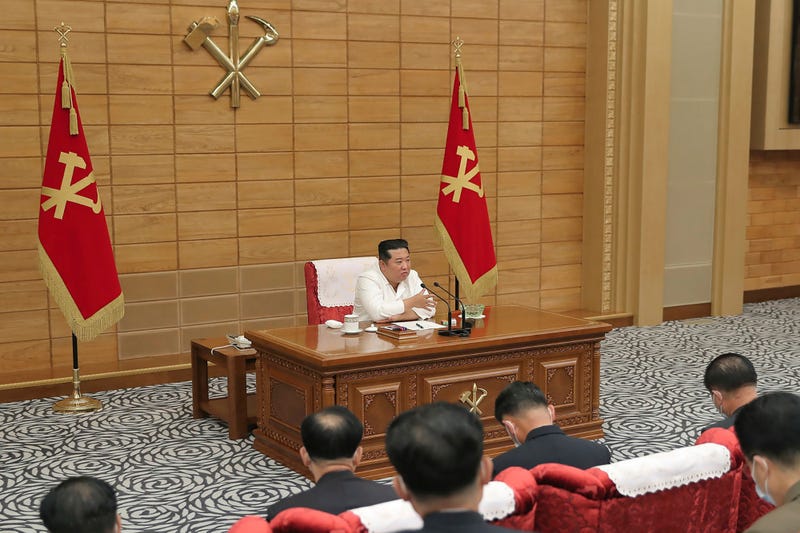 The discussion at the North’s Politburo meeting suggests it will soon relax a set of draconian curbs imposed after its admission of the omicron outbreak this month out of concern about its food and economic situations.

Kim and other Politburo members “made a positive evaluation of the pandemic situation being controlled and improved across the country,” the official Korean Central News Agency said.

They also “examined the issue of effectively and quickly coordinating and enforcing the anti-epidemic regulations and guidelines given the current stable anti-epidemic situation," KCNA said.

On Sunday, North Korea reported 89,500 more patients with fever symptoms, taking the country’s total to 3.4 million. It didn’t say whether there were additional deaths. The country’s latest death toll reported Friday was 69, setting its mortality rate at 0.002%, an extremely low count that no other country, including advanced economies, has reported in the fight against COVID-19.

Many outside experts say North Korea is clearly understating its fatality rate to prevent any political damage to Kim at home. They say North Korea should have suffered many more deaths because its 26 million people are largely unvaccinated against COVID-19 and it lacks the capacity to treat patients with critical conditions. Others suspect North Korea might have exaggerated its earlier fever cases to try to strengthen its internal control of its population.

Since its May 12 admission of the omicron outbreak, North Korea has only been announcing the number of patients with feverish symptoms daily, but not those with COVID-19, apparently because of a shortage of test kits to confirm coronavirus cases in large numbers.

But many outside health experts view most of the reported fever cases as COVID-19, saying North Korean authorities would know how to distinguish the symptoms from fevers caused by other prevalent infectious diseases.

The outbreak has forced North Korea to impose a nationwide lockdown, isolate all work and residential units from one another and ban region-to-region movements. The country still allows key agricultural, construction and other industrial activities, but the toughened restrictions have triggered worries about its food insecurity and a fragile economy already hit hard by border shutdowns because of the pandemic.

Some observers say North Korea will likely soon declare victory over COVID-19 and credit it to Kim’s leadership.

Yang Un-chul, an analyst at the private Sejong Institute in South Korea, said the North’s recently elevated restrictions must be dealing a serious blow to its coal, agricultural and other labor-intensive industrial sectors. But he said those difficulties won’t likely rise to a level that threatens Kim’s grip on power, as the COVID-19 outbreak and strengthened curbs have given him a chance to boost his control over the population.