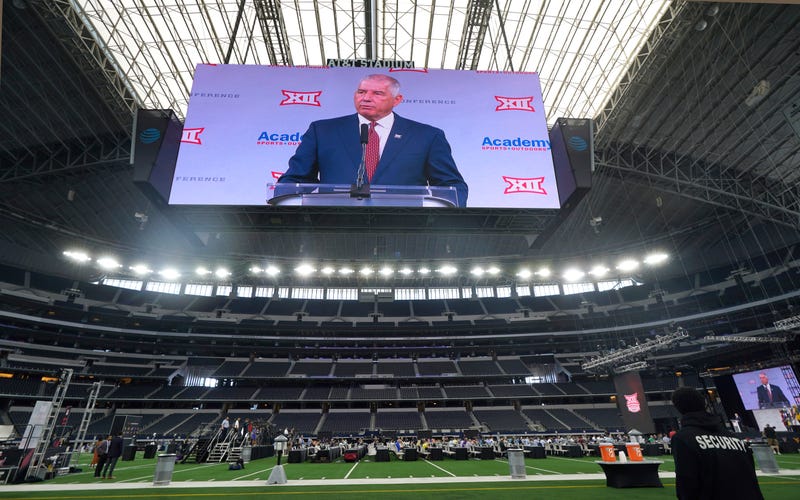 Big 12 Commissioner Bob Bowlsby accused ESPN of encouraging other conferences to pick apart the league so Texas and Oklahoma can move to the Southeastern Conference more quickly and without paying a massive buyout.

“I have absolute certainty that they (ESPN) have been involved in manipulating other conferences to go after our members,” Big 12 Commissioner Bowlsby told The Associated Press on Wednesday after sending a cease-and-desist letter to the network.

The letter addressed to ESPN executive Burke Magnus, President of Programming and Content, said the Big 12 had become aware the network had taken actions “to not only harm the Big 12 Conference but to result in financial benefits for ESPN.”

ESPN, which owns the SEC Network, signed a $3 billion deal with the SEC last year that will give the network the broadcast rights to all the conference's football games starting in 2024.

The network also has a contract with the Big 12, though it shares those rights with Fox. Those deals expire in 2025.

Bowlsby declined to name the conference in an interview with AP, but a person with knowledge of the situation said the commissioner was referring to the American Athletic Conference. The person spoke on condition of anonymity because the Big 12 didn't authorize the release of that information.

“The claims in the letter have no merit," ESPN said in a statement.

Texas and Oklahoma informed the Big 12 this week they would not be renewing an agreement that binds them to the league and its eight other members until 2025. The grant of media rights runs concurrently with the Big 12′s billion-dollar television contracts with ESPN and Fox.

On Tuesday, Texas and Oklahoma submitted a request to the SEC to join that league in 2025. To join the conference earlier than that could cost the schools tens of millions of dollars — unless the Big 12 were to fall apart because some of the other members left as well.

“ESPN is incentivizing other conferences to destabilize the Big 12,” Bowlsby added.

In addition to the SEC and AAC, ESPN owns the rights to all Atlantic Coast Conference athletics and shares the rights to the Big Ten and Pac-12 with Fox.

Bowlsby told AP that Texas and Oklahoma have been working on a move to the SEC for months, doing so while taking part in Big 12 strategy meetings where proprietary information was shared.

Bowlsby said he suspects ESPN was involved behind the scenes when Texas and Oklahoma were in discussions with the SEC, but he has no proof of that.

“This whole thing has been a complete articulation of deception,” he said.

SEC university presidents and chancellors are scheduled to meet tomorrow, but it is unclear if they will vote on extending invitations to conference to Oklahoma and Texas. Eleven of the 14 members would need to vote in favor of inviting a new member, and it appears that won't be a problem.

Texas A&M officials had voiced their displeasure last week with the possibility of rival Texas joining the SEC, but A&M's board of regents on Wednesday directed University President Katherine Banks to vote in favor of the Longhorns and Sooners coming aboard.

Follow Ralph D. Russo at https://twitter.com/ralphDrussoAP and listen at https://APpodcasts.com