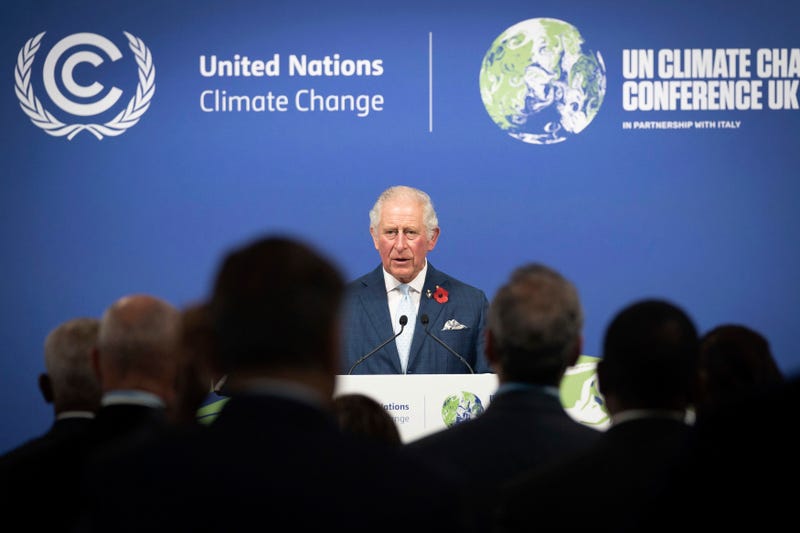 LONDON (AP) — King Charles III has decided not to attend the international climate change summit in Egypt next month, fueling speculation that the new monarch will have to rein in his environmental activism now that he has ascended the throne.

The Sunday Times newspaper reported that the decision came after Conservative Prime Minister Liz Truss objected to Charles attending the conference, known as COP27, when she met with the king last month at Buckingham Palace.

But a member of Truss' Cabinet said the government and palace were in agreement about the decision.

“That is a decision that has been made amicably, as far as I am aware, between the palace and the government,'' Simon Clarke told Times Radio. "The suggestions this morning that he was ordered to stay away are simply not true.”

Clarke also rejected suggestions that Truss didn't want Charles to attend the summit because she intends to water down Britain's climate goals. The government remains committed to the achieving its target of net-zero carbon emissions by 2050, he said.

Under the rules that govern Britain’s constitutional monarchy, the king is barred from interfering in politics. By convention, all official overseas visits by members of the royal family are undertaken in accordance with advice from the government.

Before becoming king when Queen Elizabeth II died on Sept. 8, there had been speculation Charles would travel to the summit in the role he then held as Prince of Wales.

Charles attended the previous climate summit,COP26, last year in Glasgow, Scotland, but his attendance at this year’s conference was never confirmed. COP27 is taking place Nov. 16-18 in the Red Sea resort of Sharm el-Sheikh.

When he was Prince of Wales, Charles was accused of meddling in government affairs, including allegations that he inappropriately lobbied government ministers.

But Charles is now king, and he has acknowledged that he will have less freedom to speak out on public issues as monarch than he did as the heir to the throne. At the same time, his advisers would be looking for the right time and place for Charles’ first overseas trip as sovereign.

“My life will, of course, change as I take up my new responsibilities,’’ Charles said in a televised address after his mother’s death.

“It will no longer be possible for me to give so much of my time and energies to the charities and issues for which I care so deeply. But I know this important work will go on in the trusted hands of others.”

Follow all AP stories on climate change issues at https://apnews.com/hub/climate-and-environment.

Follow all AP stories on the British monarchy at https://apnews.com/hub/queen-elizabeth-ii.