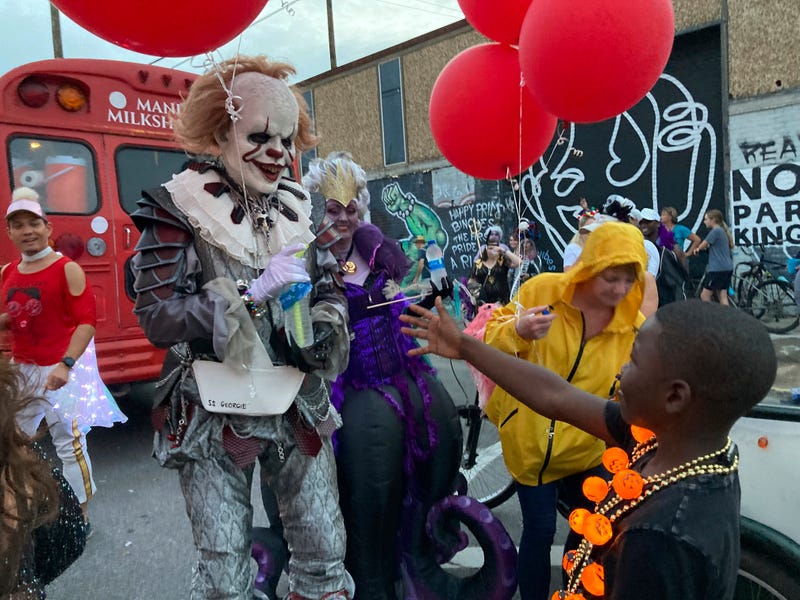 NEW ORLEANS (AP) — The high school bands played, the costumed marching groups danced and float riders threw Moon Pies and beads to the thousands of people who turned out Saturday for New Orleans' first big parade since the onslaught of the coronavirus pandemic put the brakes on the city's signature brand of frivolity.

“It’s better than Christmas," said Lacey Sanders, who is a member of the Pussyfooters marching club. "I have been waiting for this since April of 2020.”

After over a year where the coronavirus largely put an end to parades, the streets were lined with thousands of residents and tourists who came to watch the Krewe of Boo parade — the first float parade since Mardi Gras of 2020.

Krewe of Boo is a Halloween-themed parade that stretches from the city's Marigny neighborhood, through the French Quarter and into the Warehouse District. Riders on the floats dress up in Halloween-themed outfits and throw ghoulish and fun trinkets and beads to crowds that pack the streets.

Crowds in sequined or glittery costumes lined the streets. Parents held costumed children on their shoulders. Members of the Rolling Elvi — an Elvis tribute group that rides scooters — took photos with each other. Students from the Lafayette Academy marching band warmed up while girls in a dance troupe practiced their moves.

All would have been common sites during a regular year, but many were cognizant of how long it's been since the city has seen such an event.

“This is one of the best feelings in a very long time. It’s so lovely," said Jordan Philebar, a New Orleans resident who was dressed as Wednesday Addams from “The Addams Family” as she rode a float along with four members of her family. “It’s lovely to feel slightly normal again.”

Mardi Gras 2020 was largely credited with contributing to the city becoming an early hot spot for the coronavirus. As the extent and seriousness of the pandemic became apparent, parades and music festivals were canceled.

If the city can pull off the Halloween-themed Krewe of Boo parade safely, with