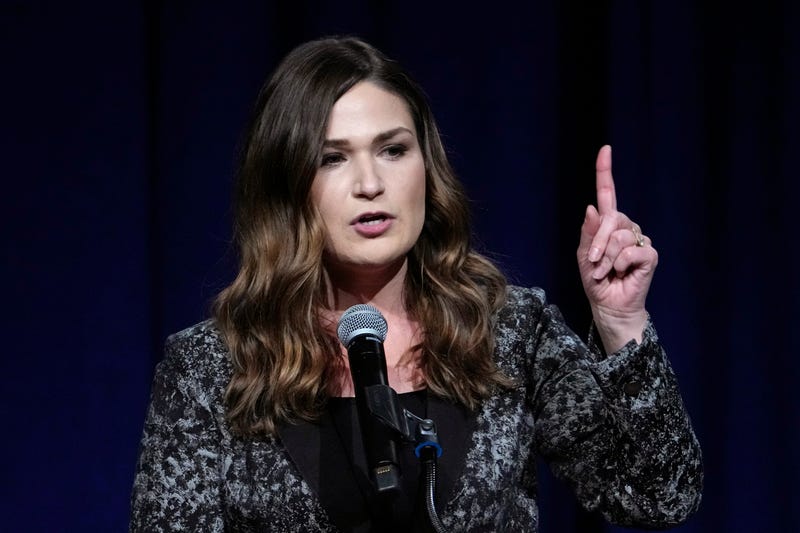 DES MOINES, Iowa (AP) — Abby Finkenauer 's bid to clinch the Democratic nomination for a U.S. Senate seat in Iowa was not supposed to be so fraught.

Finkenauer, 33, is one of the more prominent Democrats in the state, earning a wunderkind reputation in the Legislature before toppling a Republican congressman in 2018. She was the second-youngest woman elected to Congress, helping Democrats retake control of the U.S. House that year.

Though she would go on to lose the Democratic-leaning district in 2020, her stature suffered little. She raised her profile on cable television and in email attacks on Republican Sen. Chuck Grassley. It all helped her raise millions of dollars before her Senate run.

But Finkenauer's campaign faced unexpected trouble last month when, at least for a moment, it appeared she would not be allowed to compete in the June 7 primary. A judge found errors in Finkenauer's nominating petitions after Republican activists challenged her filings.

The Iowa Supreme Court ultimately assured her spot on the ballot, but the turmoil — and Finkenauer's response — prompted some prominent Democrats to give another look to her chief primary rival, retired Navy admiral Mike Franken.

Some Democrats blame Finkenauer, who blasted the Republican-appointed state judge's ruling as “deeply partisan," for quickly blaming political motivations and not acknowledging her own campaign's organizational mistakes.

“It really just struck me the wrong way,” said Bonnie Campbell, a former Iowa attorney general and past Democratic nominee for governor.

Campbell had contributed money to Finkenauer’s campaign but also had been eyeing Franken. Finkenauer’s remarks tipped the scales, she said.

“It’s the same thing Donald Trump says, that this is all about politics,” Campbell said. “I thought, what are my alternatives?”

Finkenauer's campaign declined a request for an interview for this story.

There is little reliable polling in the primary, and the winner faces a daunting challenge in Grassley, who raised more money through March than Finkenauer and Franken combined.

Adding to the challenge, Iowa has shifted sharply to the right over the past decade, making the Democratic primary a kind of test case for the party in Iowa and other once-competitive northern rural states about the path back to power.

Still, Finkenauer retains the backing of more Democratic state legislators than Franken. She received the endorsement last month of the Iowa Federation of Labor, Iowa's largest union organization. She also had raised more than $3 million to Franken's $1.8 million, according to the most recent finance filings.

Finkenauer has a higher national profile in addition to the cable news appearances, in part as a regular spokeswoman on the presidential campaign trail for Joe Biden ahead of the 2020 election.

But Franken has quietly built a competitive campaign, backed by former party officials such as Campbell and former Lt. Gov. Patty Judge. Franken, a distant second-place finisher in Iowa's 2020 Senate primary, also raised more money in the first quarter of 2022 than Finkenauer, and had more money on hand entering the second quarter. Franken was also first to begin airing TV ads, which began in April. Finkenauer planned to begin advertising next week.

Though Finkenauer and Franken are a close match on policy, they present strikingly different profiles.

Finkenauer is more than 30 years younger than the 64-year-old Franken. Her message leans heavily on her working-class upbringing in blue-collar Dubuque, as it did in her two congressional campaigns and campaigns for state legislature. Often with a wide smile, she campaigns with an impassioned edge, as she did at a recent state Democratic fundraiser.

“I will never ever forget where I come from and who I fight for," Finkenauer promised 600 state party activists at the Iowa Events Center in Des Moines.

Tall, graying and standing ramrod straight, Franken's approach is understated. With a dry sense of humor, Franken spends most of his campaign time answering audience questions, promoting a standard progressive platform but with a calm unfamiliar in much of politics today.

“I'm also running to dial down political tension to achieve these things," Franken told the crowd at the Des Moines banquet.

Finkenauer has been on a political course since college when she volunteered as a college student for Joe Biden's 2008 campaign and later as a legislative page. She won an Iowa House seat at age 24 in 2014, earning a reputation as a vocal member in the minority party, and U.S. House seat four years later.

Franken has skippered ships around the world, but also worked on Capitol Hill longer than Finkenauer, as a legislative aide to the late Sen. Edward M. Kennedy of Massachusetts and the Department of the Navy's legislative liaison during the Obama administration.

It's Finkenauer's stylistic contrast with the 88-year-old, gravelly-voiced Grassley that make her the better choice for Andrea Phillips, a former deputy state Democratic Party chairwoman.

“The contrasts with Abby — you know, younger, fresh ideas, newer generation — it presents voters with a clearer choice," said Phillips.

Phillips, though, would like to have heard Finkenauer take responsibility for her campaign's administrative mistake. When asked repeatedly by reporters, Finkenauer has not said she was at fault for errors the Iowa Supreme Court found not significant enough to keep her off the ballot.

Finkenauer's campaign offered the bare minimum of signatures needed from different counties, leaving herself almost no margin for error. But the judge found a small handful of signatures out of the 5,000 obtained by Finkenauer’s campaign were not properly dated, as required by state law.

At the party fundraiser, Des Moines Democrats Suzanne and Tom Fross were split on the impact of the episode. Suzanne Fross, a retired state employee, said, “She handled it fine. It was a Republican ambush." Her husband, a manufacturing manager, said, “It was embarrassing. She should have owned up to it."

Yet, neither have decided who they'll support with less than a month to go.

Veteran Dubuque Democratic party volunteer Diane Gibson said she “didn't need much of a nudge" to consider Franken after the episode.

“Abby hasn't taken responsibility for her own campaign's failure to do the job," said Gibson. “That's the mark of a rookie."

This story has been corrected to reflect that among the former Democratic officials who are backing Mike Franken is former Lt. Gov. Patty Judge, not former Lt. Gov. Sally Pederson.