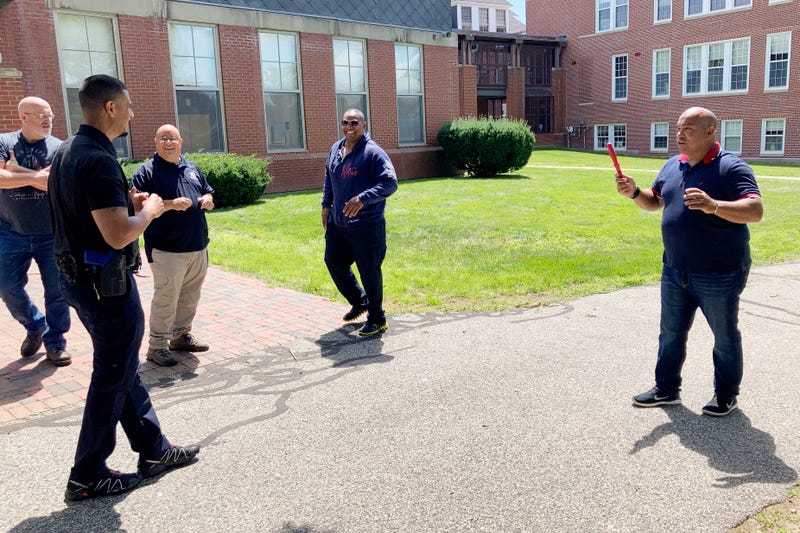 SACO, Maine (AP) — Angry over being fired, a former employee slashed the tires of his boss’ vehicle and still held the knife when police officers arrived.

Three officers positioned themselves at a safe distance as the man yelled and ranted. One officer had a stun gun, another a handgun.

The third used the most important tool — a willingness to talk.

Here in a school parking lot in Maine, the emergency was fake, but the strategies were very real. The officers were going through a training course offered by the Police Executive Research Forum that thousands of police officers around the country are receiving this year. Officers are taught: keep a safe distance, slow things down.

The organization based in Washington, D.C., is the foremost policing think tank in the country. Its two-day training now has a long waiting list.

“The most common mistake is rushing a situation that you don’t need to rush,” said Steven Stefanakos of New York City Police Department, who was brought in to help train the officers. “When you compress time and space, it usually does not go the way we want it to go.”

Police department requests for training on how to better deal with the public have skyrocketed since the death of George Floyd and the protests that followed, particularly as calls to defund police rise and cities pass reforms aimed at cracking down on police brutality.

The Police Executive Research Forum's training effort began five years ago after the shooting of Michael Brown, an unarmed black man, in Ferguson, Missouri, and has been updated since with fresh techniques. The idea had its genesis in the United Kingdom, where most officers don’t carry handguns, forum director Chuck Wexler said. It's a mix of classroom training and scenarios played out with actors to give officers time to work through what they've learned.