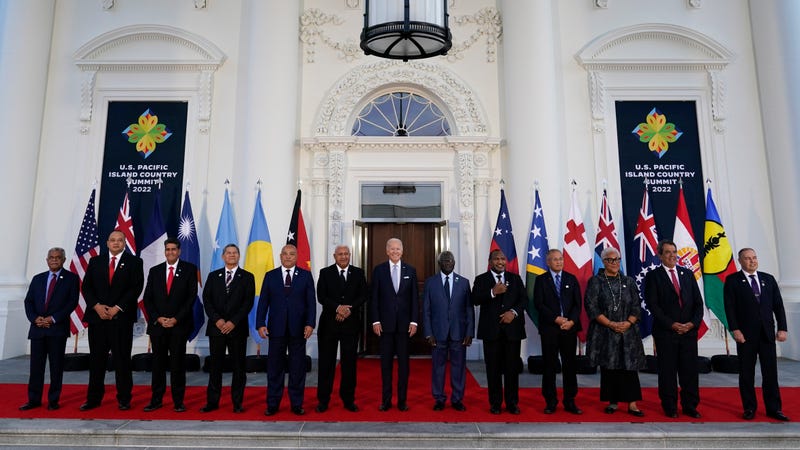 WASHINGTON (AP) — President Joe Biden on Thursday told visiting leaders from more than a dozen Pacific Island countries that the U.S. was committed to bolstering its presence in their region and becoming a more collaborative partner as they face the “existential threat” of climate change.

The president addressed the leaders who gathered in Washington for a summit as the White House looks to improve relations in the Pacific amid growing U.S. concern about China’s growing military and economic influence.

“A great deal of history of our world is going to be written in the Indo-Pacific over the coming years and decades,” Biden said at the start of a meeting with island leaders at the State Department. “And the Pacific Islands are a critical voice in shaping the future, and that’s why my administration has made it a priority to strengthen our partnership with your countries.”

Biden delivered his remarks as his administration unveiled its Pacific strategy, an outline of the White House's plan to assist the region's leaders on pressing issues like climate change, maritime security and protecting the area from overfishing. The administration also pledged that the U.S. would add $810 million in new aid for Pacific Island nations over the next decade, including $130 million on efforts to stymie the impacts of climate change.

“We’re seeing the consequences of climate change around the world very vividly, including in the United States right now, and I know your nations feel it acutely,” Biden said.

Leaders from Fiji, the Marshall Islands, Micronesia, Palau, Papua New Guinea, Samoa, the Solomon Islands, Tonga, Tuvalu, the Cook Islands, French Polynesia and New Caledonia are attending the two-day summit that Secretary of State Antony Blinken kicked off Wednesday. Vanuatu and Nauru sent representatives, and Australia, New Zealand and the secretary-general of the Pacific Island Forum sent observers, according to the White House. The president hosted leaders for a dinner Thursday evening at the White House.

The summit comes amid worrying signs to the U.S. that Beijing has grown its influence in the region. Earlier this year, the Solomon Islands signed a new security pact with Beijing, and ahead of the summit signaled it would be hesitant to sign any end-of-summit statement critical of China.