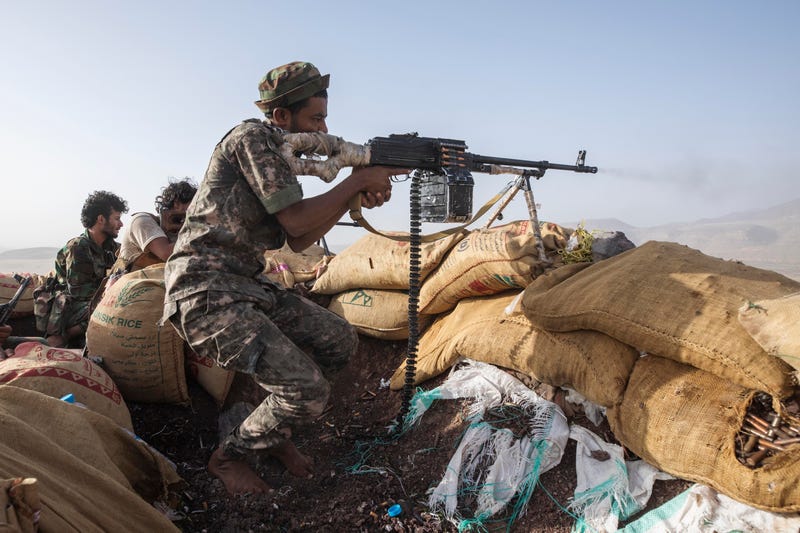 CAIRO (AP) — Twice in the past week, Yemen’s rebels have launched attacks with missiles and drones on the United Arab Emirates, a major escalation for one of the world’s most protracted conflicts.

The attacks underscore how the war that has ground on for over seven years in the corner of the Arabian Peninsula can flare into a regional danger. One of this week’s attacks targeted an Emirati military base hosting U.S. and British forces.

Already, the conflict has killed tens of thousands of civilians and fighters in Yemen and created a yearslong humanitarian disaster in the Arab world’s poorest country.

The war pits the internationally recognized government, backed by a coalition including Saudi Arabia and the UAE, against the Iranian-backed Houthi rebels. It began in September 2014, when the Houthis seized the capital, Sanaa, and much of northern Yemen. At the time with American backing, the coalition entered the war in March 2015 to support the government of President Abed Rabbo Mansour Hadi, whose forces and other loosely allied militias hold the south.

Here’s a look at the latest developments.

WHY HAS THE WAR ESCALATED?

The Houthis blame the Emirates for significant recent battlefield losses inside Yemen, that have virtually ended their efforts to complete control of the country's north.

Primarily, they are looking to retaliate after their offensive aiming to seize the crucial central Yemeni city of Marib floundered.

The Houthis launched the offensive last year, and at times it looked like they might succeed in taking the city from the government. Capturing Marib would have sealed their control over the entire north of Yemen, brought the province’s relative wealth into their hands and given them leverage in future peace negotiations.

Despite suffering heavy casualties from coalition airstrikes, the Houthis reached just outside the city. The coalition stepped up ground support to the city’s defenders. But the tide only really turned when Emirati-backed forces known as the Giants Brigade made a concerted push in the southern province of Shabwa this month. They pushed out the Houthis and reclaimed Shabwa, then cut off key Houthi supply lines in Marib province and are now advancing into the province.

The escalation prevented Marib from falling into Houthi hands but “it required some political realignments” within the coalition, said Peter Salisbury, a Yemen expert at the International Crisis Group. The Saudis, he said, had to allow the empowering of Emirati-backed forces, undermining allies of Hadi, who has had a longtime rivalry with the UAE.

The Houthi’s reply has been to fire ballistic missiles and explosive-laden drones, first on Saudi Arabia and now on the UAE.

On Monday, the UAE and U.S. militaries said they intercepted two ballistic missiles over Abu Dhabi. The rebels said they targeted the Al-Dhafra Air Base, which hosts both American and British forces.

Last week, the rebels claimed another attack on Abu Dhabi that targeted the airport and a fuel depot. The strike killed three people and wounded six others.

Earlier this month, the Houthis also seized an Emirati ship in the Red Sea, off the coast of Hodeida, a rebel-held port that the two sides have long battled over. They claimed the vessel carried weapons. The coalition said it carried medical equipment from a dismantled Saudi field hospital on the Yemeni island of Socotra. The coalition has threatened to attack Houthi-held ports if they don’t release the vessel.

In seeming retaliation, the coalition has launched intense airstrikes on Sanaa and other rebel-held areas. The strikes killed dozens of civilians, including over 80 people in a detention center in the northern province of Saada.

Another coalition airstrike on a telecommunications building knocked Yemen off the internet for days before being restored early Tuesday.

Raiman al-Hamdani, a visiting fellow at the European Council on Foreign Relations, said the Houthis are trying to draw the UAE back into a conflict from which it has been trying to extricate itself.

The fighting is “an example of the lack of willingness on all sides to come to any consensus,” he said.

The escalation on both sides has brought condemnation from Western powers, who have grown tired of trying to broker a peace in Yemen. Most of that frustration now seems focused on the rebels.

That de-listing, along with an official end to U.S. support for the coalition, had aimed to calm tensions in hopes of boosting peace efforts and addressing humanitarian needs. Yemeni and Saudi officials have maintained that the U.S. measures only emboldened the Houthis.

The U.S. and U.N. diplomatic moves failed to bring the two sides to negotiations as the Houthis pressed their Marib offensive. In July, U.S. State Department spokesman Ned Price said that the Biden administration was “beyond fed up” with the Houthis.

The Houthis have also taken a hard line on other fronts. They have not allowed the U.N. special envoy for Yemen, Hans Grundberg, to visit since he was appointed in August. The rebels seized the now-closed U.S. Embassy in Sanaa and detained dozens of local employees. They also detained two U.N. staffers working for the U.N. human rights office and UNESCO.

Some speculate that Iran could be playing a role in their Houthi allies’ escalations.

Al-Hamdani, the analyst, is reluctant to give too much credence to the idea that Iran is pulling strings.

The Houthis may owe Iran for its support, but Iran can’t just order them to do something, he said. “This only occurs when it’s convenient for both.”