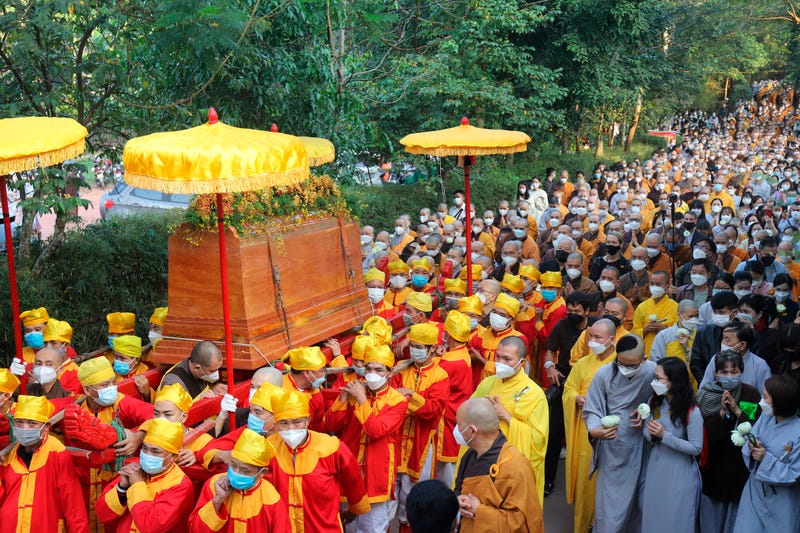 HANOI, Vietnam (AP) — A funeral was held Saturday for the Vietnamese Buddhist monk Thich Nhat Hanh, a week after the renowned Zen master and peace activist died at the age of 95 in Hue in central Vietnam.

Thousands of monks and disciples trailed a procession of pallbearers carrying Nhat Hanh's coffin from Tu Hieu Pagoda, where he spent his last days, to the cremation site. Others kneeled and clasped their hands in prayer on the roadside and bowed to the ground as the casket went past.

Nhat Hanh was globally recognized for spreading the practice of mindfulness and socially engaged Buddhism, particularly in the West. For most of his life, he lived in exile at Plum Village, a retreat center he founded in southern France.

Born Nguyen Dinh Lang in 1926 in Hue and ordained at the age of 16, Nhat Hanh distilled Buddhist teachings on compassion and suffering into easily grasped guidance over a lifetime dedicated to working for peace.

His campaign against the Vietnam War in the 1960s led to him being barred from returning to both North and South Vietnam. He was only allowed back into the country in 2005, when the communist-ruled government welcomed him back in the first of several visits.

Surviving a stroke in 2014 that left him unable to speak, Nhat Hanh returned home in October 2018, spending his final years at the Tu Hieu Pagoda.

During the seven-day wake, Nhat Hanh was laid in state in Tu Hieu Pagoda's full moon reception hall, where his disciples came to pay respect in silence and practice meditation as a tribute to his teachings.

“I am happy and feel at peace that I could come to Hue to say farewell and meditate with ‘Su Ong’ for the last time,” said Do Minh Hieu, a follower of Nhat Hanh's who traveled from southern Ho Chi Minh City with his family for the funeral. “Su Ong” is an affectionate Vietnamese term meaning “Grandpa Monk."

According to his wishes, Nhat Hanh will be cremated and his ashes will be scattered at Plum Village centers and monasteries around the world.