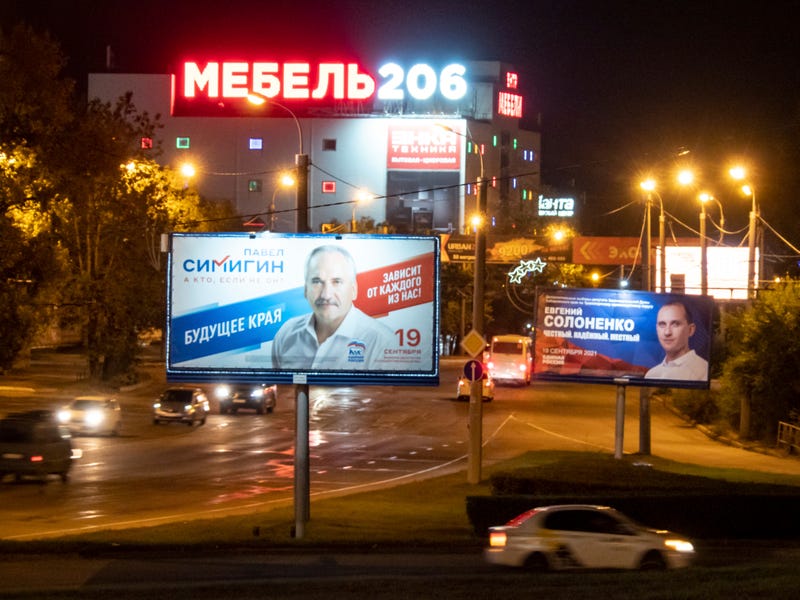 KHABAROVSK, Russia (AP) — The handful of demonstrators gathering each evening in Khabarovsk are a shadow of the masses who took part in an unusually sustained wave of protests last year in the Russian Far Eastern city, but they are a chronic reminder of the political tensions that persist.

The demonstrators have been demanding the release of the region’s popular former governor, Sergei Furgal, who was arrested last year on charges of being involved in killings.

Now, his Kremlin-appointed replacement, Mikhail Degtyaryov, is on the ballot for governor in the three days of regional voting that concludes Sunday. The regional election is taking place at the same time that Russians are voting for members of the State Duma, the national parliament.

The race for governor is being closely watched to gauge how much anger remains in the region, located seven time zones and 6,100 kilometers (3,800 miles) east of Moscow.

“The region really worries the Kremlin because they don’t want a repeat of those incidents (last years’ protests) of course. Khabarovsk is now under close supervision,” said Andrei Kolesnikov of the Carnegie Moscow Center think tank.

Three other people are on the ballot for governor, but supporters of Furgal and others in the city of about 600,000 complain they are insignificant candidates who were allowed to run to give the appearance of a democratic and competitive race.

“Whoever posed even the smallest threat was barred from running, and they left only spoiler candidates,” said 64-year-old protester Zigmund Khudyakov.

Notably, United Russia — the country's dominant political party and loyal backer of President Vladimir Putin — is not fielding a candidate for governor in Khabarovsk. Nor is Russia’s second-largest party, the Communists.

Degtyaryov, a member of the nationalist Liberal Democratic Party, is widely believed to be backed by the Kremlin with both advice and money.

The man who wanted to run on the Communist ticket was kept off the ballot because he was unable to get enough signatures from officials. That aspiring candidate, Pyotr Perevezentsev, told The Associated Press that municipal authorities in some districts had been told by their superiors whose nominating petitions to sign.

“People representing the presidential administration curated these elections,” he said.

Separately, Furgal's son Anton says he was kept off the ballot for the national parliament. “