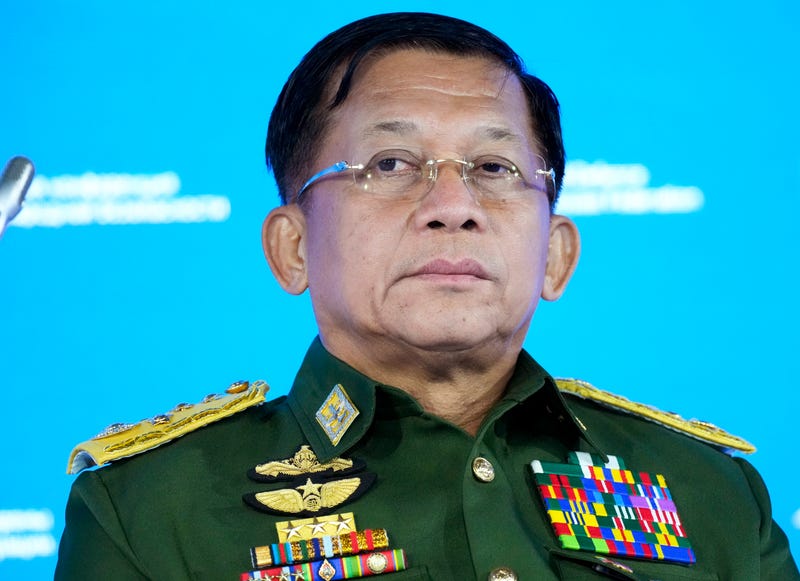 BANGKOK (AP) — The leader of Myanmar’s military-installed government said Monday that other Southeast Asian countries should share responsibility for failing to help quell the violence that has engulfed his nation since the army seized power in February.

Senior Gen. Min Aung Hlaing in a speech broadcast on state television blamed groups that were organized to oppose the military takeover for the ongoing deadly unrest. He suggested that the Association of Southeast Asian Nations had failed to recognize the responsibility of opposition groups for the violence and said his government was seeking to restore peace and stability.

Opposition to military rule initially took the form of nonviolent protests, but escalated to armed self-defense after security forces used deadly force to disperse demonstrations. A detailed accounting by the Assistance Association for Political Prisoners blames security forces for the killings of almost 1,200 civilians. The government now faces a growing insurgency in many parts of the country.

Min Aung Hlaing was commenting on ASEAN's decision on Friday to invite a non-political representative from Myanmar instead of a member of its ruling council to the bloc's summit meeting later this month.

The virtually unprecedented rebuke of one of its 10 members came after ASEAN’s special envoy to Myanmar, Brunei Second Foreign Minister Erywan Yusof, abruptly canceled a long-delayed visit when he was told he would not be able to meet with ousted leader Aung San Suu Kyi and others as he had requested.

Suu Kyi, whose National League for Democracy party was set to begin a second five-year term in office after winning last year’s general election, has been detained since the takeover and is being tried on several charges that her supporters say are politically motivated.

Min Aung Hlaing in his speech said that while the agreement called for stopping the violence and restoring stability through the cooperation of all parties, opposition groups had exacerbated the situation by carrying out “terrorism, robbery and killings.”

“We are still dealing with this, right up to now, but no one has put serious obstructions in the way of their violence. We were asked to solve it and we are the ones clearing up the problem. I want to say that ASEAN needs to do something about it.”

He specifically blamed the violence on the Committee Representing Pyidaungsu Hluttaw, which consists of elected members of Parliament who were barred by the military from taking their seats, and the National Unity Government, an underground but popular organization that says it is the country’s legitimate leadership.

He also blamed armed groups of ethnic minorities seeking greater autonomy, who are loosely allied with the shadow government.

In recent months, as security forces have continued their violent clampdown, opposition militants have fought back and carried out assassinations and sabotage in their struggle.

Referring to the ASEAN special envoy’s aborted visit, Min Aung Hlaing said some points at issue were “non-negotiable.“ The government has previously said the envoy could not be allowed to meet with Suu Kyi because she faces criminal charges.

In his 13-minute speech, Min Aug Hlaing also announced an amnesty for thousands of people who were arrested for taking part in protests against the military's seizure of power. State television said 1,316 convicts were freed from prisons around the country and charges against 4,320 others were suspended.

He said they were freed so they could carry out virtuous activities with a calm mind during the upcoming Thadingyut festival of lights and help restore peace and stability.

The Assistance Association for Political Prisoners says at least 9,043 people have been arrested since the takeover and 7,355 were in detention when the amnesty was announced.