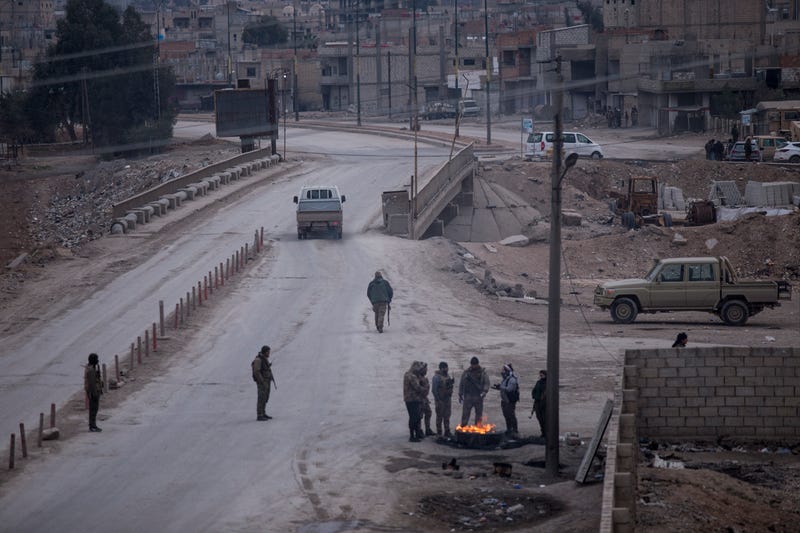 BEIRUT (AP) — U.S.-backed Syrian Kurdish fighters deployed inside a prison in northeast Syria on Monday, closing in on the facility’s last wing controlled by militants for days, the force and a war monitor said. The raid follows the surrender of hundreds of Islamic State fighters and aims to end one of the most brazen attacks by the group in years.

Forces took over buildings near the prison's northern wing, said Farhad Shami, a spokesman for the Kurdish-led Syrian Democratic Forces. That's where dozens of IS militants have been holed up since Thursday.

Over a dozen Kurdish fighters and more than 100 militants have been killed in clashes since the assault began, according to the Kurdish-led force. The number of fugitives remain unclear.

Journalists at the scene said Kurdish officials asked them to step away from the vicinity of the prison earlier Monday, apparently in anticipation of a military operation.

The Britain-based Syrian Observatory for Human Rights reported a buildup of Kurdish forces backed by U.S. armored vehicles around the prison.

Witnesses in the city of Hassakeh, where the prison is located and is under a tight security cordon, said buses arrived at the prison apparently to transport militants who had turned themselves in to another location. Coalition helicopters were hovering overhead, a resident said.

By Monday evening, more than 96 hours after the initial assault, clashes resumed between the SDF and accompanying forces and militants still holed up in the prison wing, said Siamand Ali, another spokesman for the SDF.

The Kurdish-led administration had announced a weeklong curfew in Hassakeh starting Monday. The International Committee of the Red Cross said tens of thousands of people fled their homes in the city seeking safety and were in need of shelter, food and health services during the harsh winter season.

U.N. spokesman Stephane Dujarric said about 45,000 people have reportedly been displaced from their homes as a result of the attack on the prison, with most seeking safety with family and friends in nearby areas, but about 750 taking refuge in two temporary shelters.

The standoff followed a bold assault on Gweiran Prison on Thursday. Militants rammed vehicles through its walls, enabling a number of imprisoned fighters to escape and take hostages. Clashes have continued since then, including with militants holed up in adjacent residential areas. The U.S.-led coalition carried out a number of strikes on suspected militants who had taken control of the prison's northern wing.

On Sunday, Shami said the militants were using hundreds of minors detained in the prison as human shields. More than 3,000 suspected IS militants, including over 600 minors, are held in Gweiran, the largest of a dozen detention facilities in Syria housing militants.

Save the Children and Human Rights Watch said Monday that audio testimony they received suggests that children were among the dead and wounded.

“Reports that children have been killed or injured are tragic and outrageous,” said Sonia Khush, Save the Children’s Syria response director, calling for the immediate evacuation of children.

Many of the boys caught in the fighting have been held in Gweiran for almost three years, including about 300 who are from Iraq and other countries, according to Human Rights Watch.

Letta Tayler, associate crisis and conflict director at HRW, said one foreign boy in an audio message described “a lot of people dead, a lot of people injured.” Tayler said the boy was speaking from the kitchen where he described coming under fire.

It was not clear if the boys, who are normally held in separate wings, were brought to the kitchen after the assault began. Earlier in the assault, SDF officials said the group had lost contact with kitchen staff, suggesting they were among hostages taken by IS.

“While the responsibility for this siege rests squarely with (IS), this does not absolve the U.S.-led coalition and the local authorities of their responsibility to take all feasible steps to protect these prisoners from harm, including hundreds of boys trapped inside who have never been charged with any crime,” Tayler said.

Khush, of Save the Children, called for foreign children to be repatriated with their families. "The international community cannot have the blood of any of these children on their hands,” she said.

Rami Abdurrahman, the head of the Observatory, said scores of minors, some as young as 15, had been moved to another prison facility to the south soon after the assault began.

Dozen of facilities in northeastern Syria run by the SDF house thousands of suspected IS militants, including foreigners, since the defeat of the extremists in 2019. The Kurdish-led administration has said the facilities are a strain on its resources and had repeatedly appealed for countries to repatriate their nationals.

Thousands of IS family members and supporters are also held in displacement camps in what amounts to detention facilities mostly for women and children.