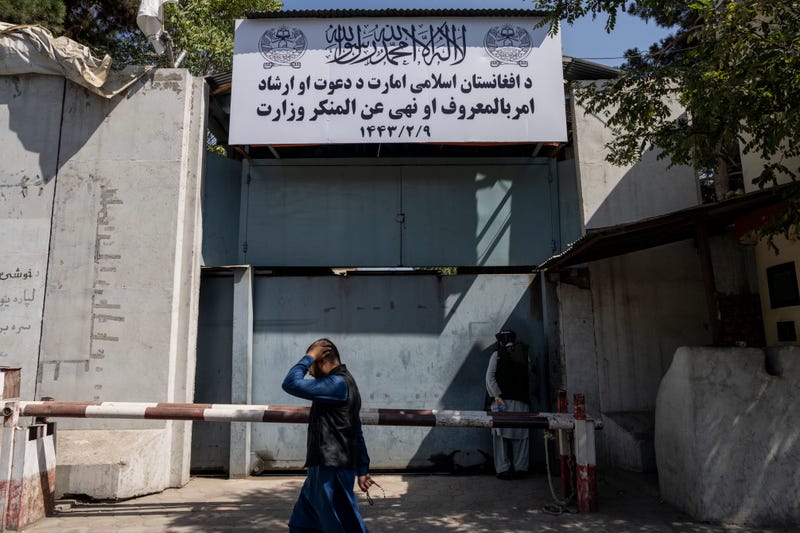 KABUL, Afghanistan (AP) — Afghanistan's new Taliban rulers set up a ministry for the “propagation of virtue and the prevention of vice" in the building that once housed the Women's Affairs Ministry, escorting out World Bank staffers on Saturday as part of the forced move.

It was the latest troubling sign that the Taliban are restricting women's rights as they settle into government, just a month since they overran the capital of Kabul. During their previous rule of Afghanistan in the 1990s, the Taliban had denied girls and women the right to education and barred them from public life.

Separately, three explosions targeted Taliban vehicles in the eastern provincial capital of Jalalabad on Saturday, killing three people and wounding 20, witnesses said. There was no immediate claim of responsibility, but Islamic State group's militants, headquartered in the area, are enemies of the Taliban.

The Taliban are facing major economic and security problems as they attempt to govern, and a growing challenge by IS militants would further stretch their resources.

In Kabul, a new sign was up outside the women's affairs ministry, announcing it was now the “Ministry for Preaching and Guidance and the Propagation of Virtue and the Prevention of Vice.”

Staff of the World Bank's $100 million Women's Economic Empowerment and Rural Development Program, which was run out of the Women's Affairs Ministry, were escorted off the grounds, said program member Sharif Akhtar, who was among those being removed.

Mabouba Suraj, who heads the Afghan Women's Network, said she was astounded by the flurry of orders released by the Taliban-run government restricting women and girls.

On Friday, the Taliban-run education ministry asked boys from grades six to 12 back to school, starting on Saturday, along with their male teachers. There was no mention of girls in those grades returning to school. Previously, the Taliban's minister of higher education minister, had said girls would be given equal access to education, albeit in gender-segregated settings.

"It is becoming really, really troublesome. ... Is this the stage where the girls are going to be forgotten?” Suraj said. “I know they don’t believe in giving explanations, but explanations are very important.”

Suraj speculated that the contradictory statements perhaps reflect divisions within the Taliban as they seek to consolidate their power, with the more pragmatic within the movement losing out to hard-liners among them, at lea