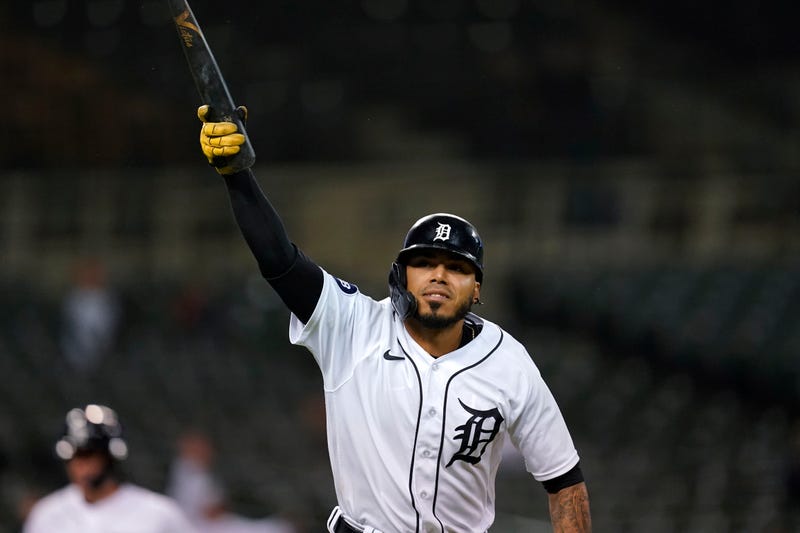 Harold Castro singled in the winning run with two outs in the 10th inning after tying it with a two-run single in the eighth in the Detroit Tigers' 4-3 victory over the Kansas City Royals on Tuesday night.

Riley Greene struck out, and the Royals decided to walk Javy Báez to pitch to Castro with the bases loaded. He hit a soft grounder up the middle to win it.

In the top of the 10th, Bobby Witt Jr. led off with a bouncer down the third-base line. Jeimer Candelario made a diving stop and, while he didn't have a play on Witt, was able to hold automatic runner MJ Melendez at second.

Alex Lange (6-4) retired Salvador Perez before getting Vinnie Pasquatino to bounce into an inning-ending double play.

The Tigers trailed 3-0 after seven innings against Zack Greinke, then tied against Dylan Coleman in the eighth.

Spencer Torkelson started the inning with a walk, then beat third baseman Hunter Dozier's throw to third on a groundball. After Tucker Barnhart lined out, Akil Baddoo's bunt single loaded the bases. Riley Greene grounded softly to Dozier, but his throw home pulled Salvador Perez off the bag.

Báez struck out, but Castro lined a 2-2 pitch to left for a tying single. Carlos Hernández came in to retire Miguel Cabrera to keep it tied.

The Royals took a 2-0 lead in the second on Dozier's home run — his 10th in 32 career games at Comerica Park and extended the margin to 3-0 on Nate Eaton's RBI triple in the fourth.

However, Kansas City could have given Greinke a bigger lead. After stranding runners in scoring position in the first two innings, Edward Oliveres hit a two-out double that would have easily scored Vinnie Pasquatino from first, but the ball hopped over the fence for a ground-rule double and Dozier struck out.

In the fourth, Eaton was on third with one out after his triple, but second baseman Jonathan Schoop made a spectacular play to snag MJ Melendez's line drive, spin and throw to third for an inning-ending double play.

The bullpen cost Greinke his 14th win against the Tigers, which would have matched the most he has against any team — he has 14 against the Rockies, Padres and Giants. He picked up the first 13 wins against Detroit early in his career, last beating the Tigers on Sept. 9, 2012, while with the Angels. His 2.36 ERA at Comerica Park is the lowest of any active pitcher (min. 75 IP).