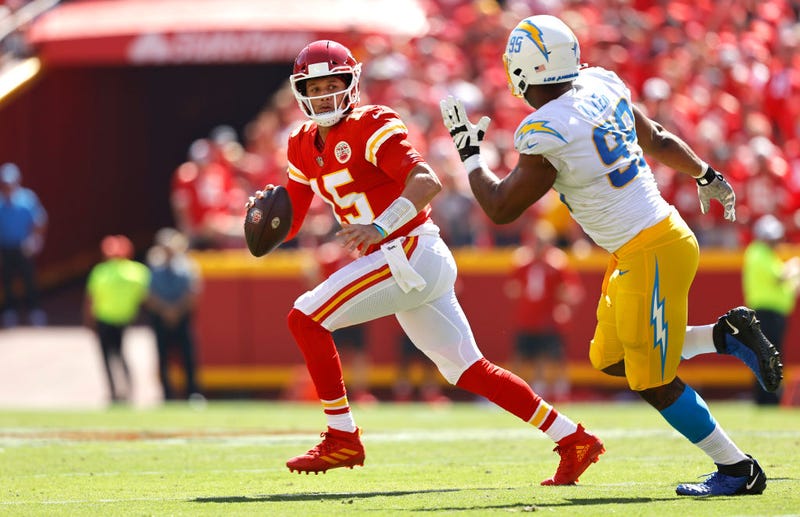 KANSAS CITY, Mo. (AP) — The Chargers capitalized on four Kansas City turnovers, including Patrick Mahomes’ second interception in the closing minutes, and Justin Herbert’s touchdown toss to Mike Williams with 32 seconds to go lifted Los Angeles to a 30-24 victory over the Chiefs on Sunday.

Herbert finished with 281 yards passing and four touchdowns without an interception, outdueling Mahomes in a matchup not only of two of the game’s best young quarterbacks but two teams expected to compete for the AFC West title.

Instead, the Chargers (2-1) won for the third time in four trips to Kansas City to send the two-time defending conference champion Chiefs (1-2) to the division cellar.

The Chiefs trailed 14-0 early but had climbed back into the game in the second half, taking a 24-21 lead midway through the fourth quarter. But the Chargers tied it on Tristan Vizcaino’s short field goal, and after Mahomes was picked by Alohi Gilman with 1:42 to go, Herbert began the march for the go-ahead touchdown.

LA answered with a 75-yard drive, converting on fourth down along the way and ending with a TD pass to Williams. But Mahomes conjured some more magic in marching his team 72 yards and finding Mecole Hardman for another go-ahead touchdown.

The Chargers had a chance to regain the lead from the Kansas City 1, but an illegal shift penalty took away a TD pass. Los Angeles had to kick a tying field goal — the first time in 13 red-zone trips this season the Chiefs had not allowed a touchdown.

Chiefs: CB Rashad Fenton was evaluated for a concussion at halftime.

The Chiefs visit Philadelphia next Sunday.