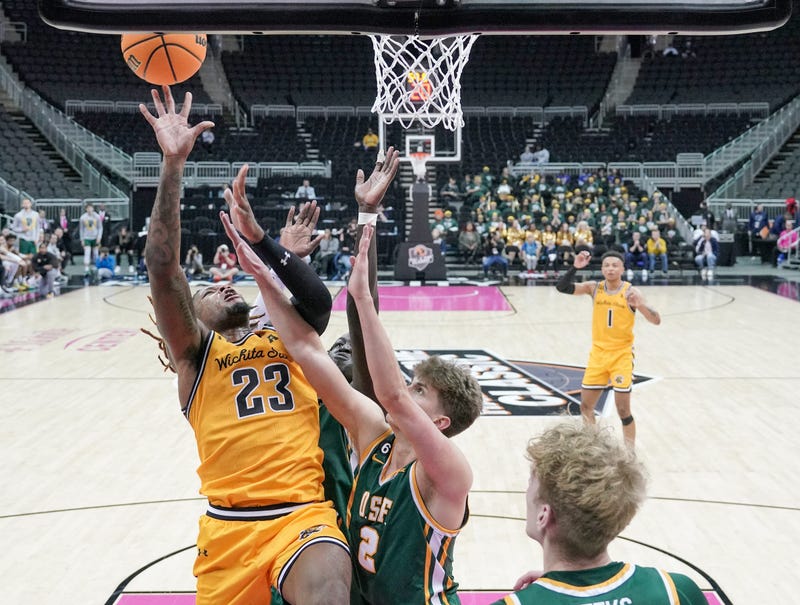 Wichita State’s furious comeback and its bid for the Hall of Fame Classic title both fell a basket short in a 67-63 loss to San Francisco, Tuesday afternoon at the T-Mobile Center.

After cutting a 13-point deficit to two over the last five minutes of the second half, WSU (3-2) came up empty on three different opportunities to tie or take the lead.

Jaykwon Walton hit 8-of-11 shots and set new career-highs with 21 points and 10 rebounds.

Craig Porter Jr. scored 16 points on 5-of-20 shooting and stuffed the box score with nine rebounds, six assists, three steals and a pair of blocks in 38 minutes.

San Francisco (6-0) shot 39.3% from the field but knocked down 12-of-34 threes. Josh Kunen was a perfect 5-for-5 from deep on his way to a team-high 15 points. Tyrell Roberts handed out seven assists in 37 turnover-free minutes.

Porter rebounded his own miss and hit a twisting corner three ahead of the halftime buzzer to send the Shockers into the locker room down just 27-23.

USF bridged halftime with an eight-minute scoring drought before sinking five shots in a row to   build its lead back to double-digits.

WSU ramped up its rebounding and full-court pressure down the stretch and finally made some shots.

Walton and Okafor hit back-to-back threes to key a 10-0 run over a span of less than two minutes.

After driving for a layup, Porter stole a pass near midcourt and fed Walton for a dunk to cut the deficit to 60-57 with still 3:20 to go.

The Shockers twice missed three-pointers that would have tied the game.

Again WSU responded. Okafor put back a missed free throw with just a under a minute left to make it a two-point game, 63-61.

Following a defensive stop, the Shockers took possession with 32 seconds remaining but turned it over when a driving Walton lost his footing and the ball.

USF iced the game at the free throw line.