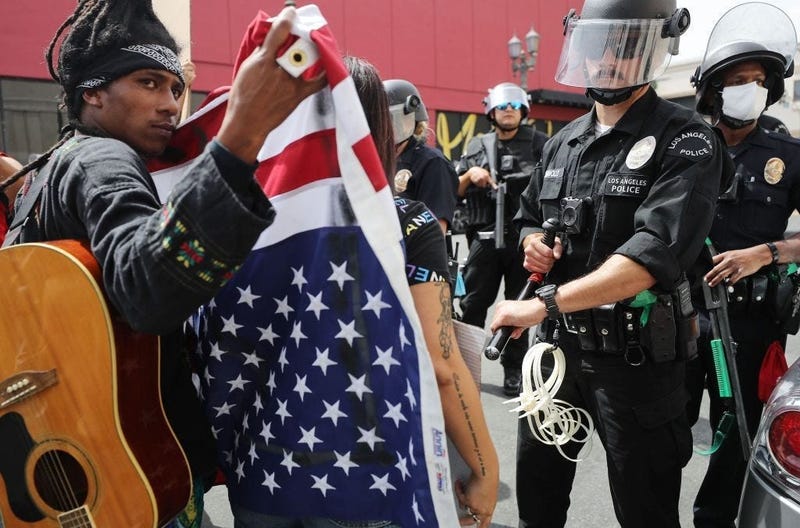 A group of homeless and criminal justice activists have banned together to file a lawsuit against the Los Angeles Police department for excessive force over their handling of protests in the wake of the death of George Floyd.

The suit, filed by the Los Angeles chapter of the National Lawyers Guild, Black Lives Matter, and the Los Angeles Community Action Network alleges that LAPD violated protesters' rights to assemble, shot a homeless man in the eye with rubber bullets, and held demonstrators for up to 12 hours for claims of violating curfews.

https://t.co/RUhgJmBn5HDTLA earlier: "completely unarmed homeless man in a wheelchair that had NOTHING to do with our protest." "They proceeded to inappropriately shoot "non-lethal" rounds directly at his face, which is against the proper procedure for firing rubber bullets." pic.twitter.com/MMdEkutgCx

The image of a man in a wheelchair after being shot in the eye went viral on social media.

This poor man in a wheelchair was shot as protesters ran from LAPD during curfew in downtown Los Angeles #rubberbullets #GeorgeFloydprotest #BlackLivesMattter pic.twitter.com/h8Q1Qp0aqK

The Los Angeles Police Department says it is aware of the images on social media and is now investigating."We cannot speculate on what caused this individual's injury without further investigation," it said, according to CBS radio host David Benaud.