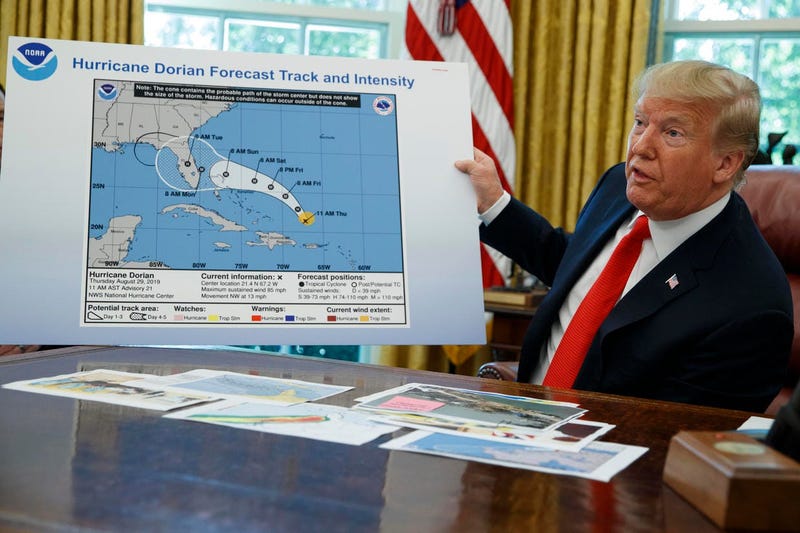 President Trump is claiming ignorance after he held up a National Oceanic and Atmospheric Administration map that appeared to have been altered with a black pen to show a projection of Hurricane Dorian possibly striking Alabama.

The unexplained map appeared during an Oval Office briefing on the hurricane comes after Mr. Trump tweeted Sunday that Alabamians were in danger from Dorian. His tweet, now deleted, said, "In addition to Florida - South Carolina, North Carolina, Georgia, and Alabama, will most likely be hit (much) harder than anticipated." The National Weather Service in Birmingham, Alabama, debunked this assertion in its own tweet 20 minutes later without mentioning the president.

When the president was asked about the map during an announcement on the opioid crisis later Wednesday, he reiterated his suggestion that the dangerous storm could have easily struck Alabama and that it had been projected to cause damage in Alabama earlier.

"I know that Alabama was in the original forecast. They thought it would get it," the president said.

Even though the National Weather Service and National Hurricane Center said there was no potential threat to Alabama, the president doubled down on his claim in several tweets Thursday morning.

"Alabama was going to be hit or grazed, and then Hurricane Dorian took a different path (up along the East Coast). The Fake News knows this very well. That's why they're the Fake News!" Mr. Trump tweeted. "What I said was accurate! All Fake News in order to demean!" he said in another tweet.