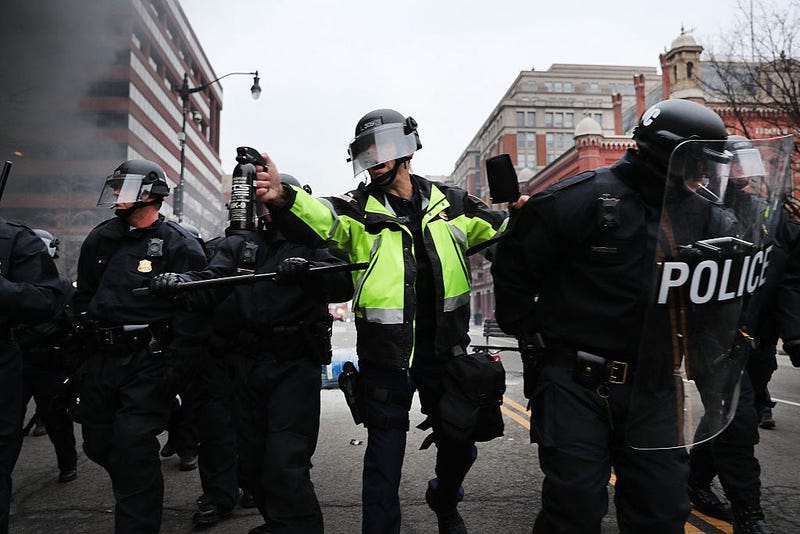 Safariland, the controversial maker of the tear gas used to clear protesters near the White House last week, and two of its distributors have generated more than $137 million in sales from the U.S. government in the past three and a half years, according to a CBS MoneyWatch review of federal spending data.

The sales, up from $83 million in the prior three-and-a-half-year period, do not include money spent by local law-enforcement agencies on Safariland tear gas. There have been multiple reports of tear gas used on protesters in Minneapolis, where George Floyd died in police custody last month, and elsewhere in recent weeks as protests against police racism spread across the country.

Federal records show the Department of Justice last year bought 160 canisters of Spede-Heat from distributor A2Z Supply. Spede-Heat canisters hold mace gas and can be shot from a distance of as much 150 feet. The canisters cost about $26 each and are manufactured by Safariland subsidiary Defense Technology.

Safariland's website says Spede-Heat should not be shot directly at people because "serious injury or death may result." A Spede-Heat canister was among the tear gas devices found by a local Washington, D.C., CBS reporter near the White House last week.

Safariland's production of tear gas and its use by the U.S. as well as foreign governments has propelled the growth of the company in recent years. It also has made Safariland a pariah on Wall Street, and its CEO, Warren Kanders, a target for activists. Private equity powerhouses Blackstone Group and KKR have exited their investments in Safariland in the past few years following public criticism for their ties to the company.

Safariland is one of the largest companies in the multi-billion dollar — and growing — business of supplying tear gas to federal agencies, police departments and foreign governments. It also makes rubber bullets and batons, as well as helmets and body armor. Safariland has about $500 million in revenue and 600 employees.

In 2016, research firm Marketsandmarkets estimated that the non-lethal weapons market would grow by more than 8% a year through 2020 to $8.4 billion, driven in part by "political disputes, violence and civil unrest." The report pointed to the Middle East, North Africa and South Asia as potential growth markets for tear gas and other non-lethal weapons.

Earlier this week, market research firm Orbis Research issued a 100-page report on opportunities in the "Riot Control Systems" market. Safariland is listed as one of the industry's top players.

Kanders, with an estimated net worth of $700 million, according to Forbes, was pressured to quit the board of the Whitney Museum of American Art last year following months of protest after it was found that Safariland supplied the tear gas fired on a group of asylum seekers, including children, at the U.S.-Mexico border. At the time, Kanders said that he was not a fair target, emphasizing that his company helps save police officers lives.

In addition to Safariland, Kanders also heads Clarus Corp., a $340 million publicly traded sporting equipment conglomerate of which he owns more than 20%. Clarus disclosed in an April filing that it paid Kanders $5.5 million in salary, stock and other compensation over the past three years.

Last week, the Instagram page of Clarus's popular mountain climbing brand Black Diamond posted a black page in solidarity with anti-police violence protesters across the U.S. On Saturday, in a statement on Instagram, the company acknowledged it was aware of "widespread concerns" about its "association" with Kanders and Safariland. The statement said the company supports Black Lives Matters and "peaceful protesters." It also pledged to donate $250,000 to support "peoples of color in the outdoors."

Safariland was started as a holster company in the 1960s by California entrepreneur Neale Perkins, who named the company after trips he had taken to Africa with his father. In 2004, Goldman Sachs helped the company raise $300 million in a structured finance deal. Kanders acquired control of the company in 2012 and became its CEO in a leveraged buyout with the help of private equity giant Blackstone, which bought a minority stake in the company and eventually lent it up $160 million.

Safariland doesn't disclose its financial information. But it had $45 million in annual operating profits, according to a 2015 article in Private Debt Investor. That was up from $10 million when Kanders bought it just three years earlier, accord to the trade publication. Kanders said at the time that Blackstone had been instrumental in helping him grow the company.

Blackstone transferred its stake in Safariland to rival private equity firm KKR in 2018 through a complex transaction that involved dozens of loans. A Blackstone spokesperson confirmed to CBS MoneyWatch that it no longer has any financial ties to Safariland. KKR earlier this year sold its remaining stake after it also faced public criticism for its ties to the company.

KKR and Blackstone aren't the only private equity firms that have financed companies that make tear gas. Carlyle Group is a minority owner of Combined Systems, which is also a producer of chemical weapons for law enforcement.

A source close to Carlyle Group told CBS MoneyWatch that the firm's small stake in Combined Systems produces no income for the firm and that it has been written down to zero.

Pacem Solutions, a privately owned manufacturer of tear gas weapons, named Joseph Schmitz, a former campaign adviser to President Donald Trump, as its chief legal officer and chair of its advisory board in 2018. The following year, Pacem had more than $1 million in sales to the federal government, up from zero in the previous decade. Nearly $150,000 of those sales are listed as for "military chemical agents," according to federal records.

On Thursday, the American Civil Liberties Union sued Mr. Trump and other government officials on behalf of the Washington, D.C., chapter of Black Lives Matter. The suit claims the use of tear gas on the protesters violated their constitutional rights.

Jamil Dakwar, director of the ACLU's human rights program, said the organization has previously looked into the issue of whether makers of tear gas can be held liable for injuries caused by their products, but is now focused on law enforcement's use of the weapons.

"It creates a severe health risk to people who are subject to it," Dakwar said. "We have been contacted by a number of members of Congress to look at the way tear gas is being used."f tear gas and that the coronavirus pandemic amplifies those objections given the damage it can do to people's lungs. Tear gas tends to cause people to cough, as well as burn the eyes.