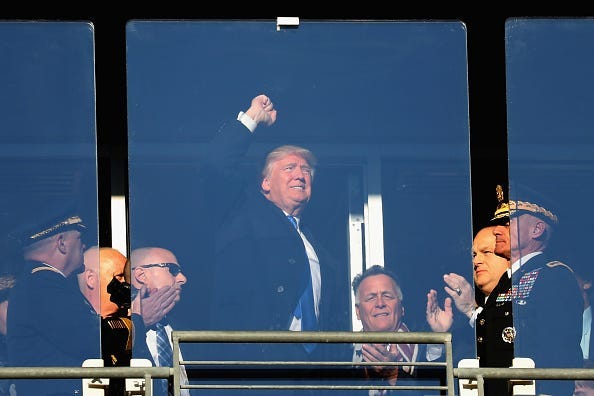 President Trump is traveling to Philadelphia Saturday to attend the annual Army-Navy game, capping off what the president called a "wild week" that saw developments in the impeachment inquiry and the president finalize the first phase of a trade deal with China.

Mr. Trump is expected to administer the coin toss at the game, which starts at 3 p.m. ET, and leave during the third quarter. He also attended the game last year.

His trip comes a day after the House Judiciary Committee voted to advance articles of impeachment to the floor for a full House vote. The House is expected to vote on the two articles – abuse of power and obstruction of Congress – next week, in addition to votes on 12 government funding bills, the National Defense Authorization Act, and the U.S.-Mexico-Canada Trade Agreement.

Mr. Trump condemned the impeachment process during a meeting with the president of Paraguay in the Oval Office on Friday, saying that one day there will be a Democratic president and a Republican House would "remember" what is happening now.

"It's a scam, it's something that shouldn't be allowed, and it's a very bad thing for our country, and you're trivializing impeachment," the president said in the Oval Office. "And I tell you what. Some day there will be a Democrat president and there will be a Republican House, and I suspect they're going to remember it."

Mr. Trump's  meeting with the president of Paraguay came after he announced a phase-one trade agreement with China. Mr. Trump said he was working on that issue when the House committee impeachment vote took place.

The deal, he said, is "going to lead to the opening of China, which is something that is incredible."