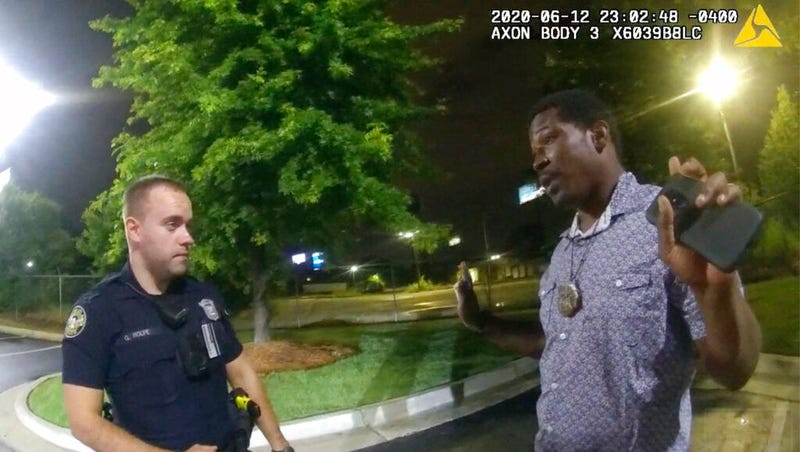 A video of Rayshard Brooks talking about the difficulties of reentering society after incarceration was posted online Wednesday. In the video, taken just four months before he was killed by an Atlanta police officer, Brooks says he wishes for greater humanity within the criminal justice system.

"If you do some things that's wrong you pay your debts to society, and that's the bottom line," Brooks says in the video interview with Reconnect, which was posted by the Reform Alliance, a criminal justice reform nonprofit. "And I just feel like some of the system could, you know, look at us as individuals. We do have lives. It was just a mistake we made, you know, and not just do us as if we are animals."

This is #RayshardBrooks, in his own words.In this heartbreaking interview filmed just four months ago, Brooks speaks about the agony of being trapped in a prison reentry and probation system that won’t let him get back on his feet. pic.twitter.com/oXAiT3815Z

Brooks, a 27-year-old black man, was shot in the back and killed by a white police officer outside a Wendy's drive-thru in Atlanta, last week. Garrett Rolfe, the former officer who fatally shot him, was charged with murder and 10 other crimes on Wednesday. The second officer at the scene, Devin Brosnan, faces three charges.

In announcing the charges, Fulton County District Attorney Paul Howard said his office concluded that Brooks was running away at the time the fatal shot was fired, and he posed "no immediate threat of death or serious physical injury" to the officers. Brooks was shot twice, at about 18 feet of distance, as he ran away from the officers, according to the district attorney.

His wife of eight years, Tomika Miller, told CBS News that she "dropped to her knees" when she heard the news of his death. "It was murder — that was not justified," Miller said. "He was shot running away. He wasn't dangerous. He wasn't coming at them in any kind of way to where they felt a threat, they shouldn't have felt threatened."

In the video posted by Reform Alliance, Brooks first introduces himself on camera as a father and "happily married" man. He stressed that incarceration takes its greatest toll on the families involved.

"It's hurting us, but it's hurting our family the most," he said. "You know because we have kids, we have jobs. We have a lot of things that, you know — life situations. We are individual people. So, as we go through these trials and tribulations, it's hurting our kids, and it's taking away from our families."

Family members remembered him as a loving "girl dad" who they could depend on. His niece, Chassidy Evans, said: "Not only was he a girl dad, he was a loving husband, caring brother and most importantly, to me, an uncle I could depend on," she said. "Rayshard Brooks was silly, had the brightest smile and the biggest heart, and loved to dance since we were kids."

Reconnect Founder and CEO Sam Hotchkiss said in a statement that Brooks came to them "with a smile that stretched from ear to ear," for a project to "record the experiences of those who struggle within the criminal justice system in this country."

In the video conversation, Brooks shared the immense pressure of caring for a family while navigating a post-incarceration world.

"I want to spend some time with my kids! But I really don't have the time. I have to try and go out, make money for this, make money for bills, or I try and get myself back on track," he said. "It's just a lot of pressure... with just having all of that on your shoulder and on your back."

Brooks said in the video that despite the pressures of parole life, he was still trying.

"I'm not the type of person to give up," he said. "I'm gonna keep going until I make it to where I want to be."