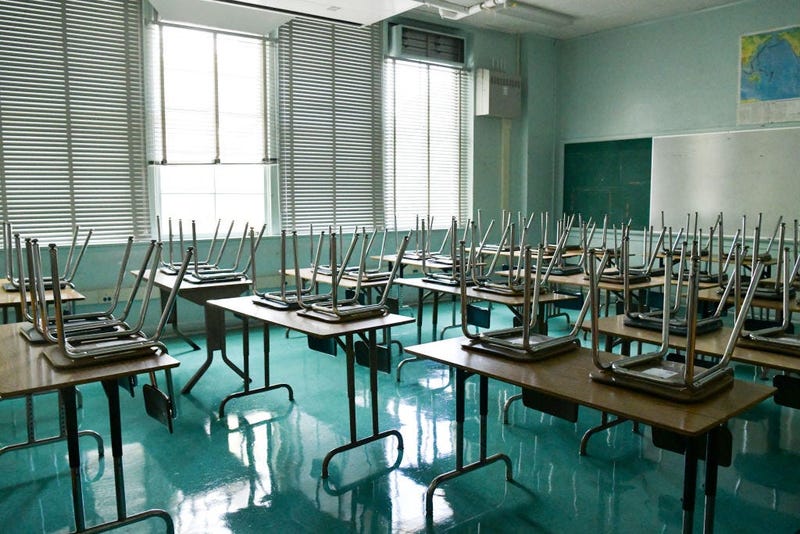 LOS ANGELES (CNS) - Los Angeles Unified School District is looking at options to reopen schools when it is safe to do so amid the COVID-19 pandemic, but Superintendent Austin Beutner said today implementing those plans won't be easy.  Referring to county and state health guidelines, Beutner said kindergarten through fifth-grade in-person instruction will likely be easier to manage, with classes that could be pared down to 12 students or so having the same teacher throughout the day.  It becomes more complicated in high school because students move from classroom to classroom, which could expand the risk of infection of the virus, he said.  "This has big implications for mitigating the risk from an occurrence of the virus," Beutner said, adding that if an outbreak were to occur at the elementary school level, a small fraction of students would have to stay home, compared to high school students who have a roaming schedule.  The Los Angeles County Department of Public Health recently announced schools would be able to offer small in-person classes for children with special needs at no more than 10% capacity at a time, with priority being given to students with disabilities and students who are learning to speak English. Those classes for children who need special services could allow at least 200,000 students back to campus across the county.  Beutner again noted a sharp drop in kindergarten enrollment this year, with the number dropping by about 10,000 students compared to last year.  "We've taken unprecedented steps to allow each class in all these early grades, transitional kindergarten through third grade, to stay together to help foster the bond between students and teachers," Beutner said.  "No teachers will be displaced from these classes. It's an unfortunate fact of life that inadequate funding of public schools by the state of California creates these types of issues. Despite the difficulties presented by the state, we're taking this action to protect our youngest learners."  County DPH officials said last week that schools will not be permitted to reopen for full in-person instruction until at least November.  LAUSD recently announced a program that will require COVID-19 testing for all students and all staff at schools, and influenza shots will be provided at schools for free from Anthem and Health Net.  It was not immediately clear if LAUSD has put together a formal plan on what protocols would be put in place before November -- if schools are allowed to reopen for in-person instruction.  "Los Angeles Unified continues to work on plans for students to return to schools as soon as it's safe and appropriate to do so," Shannon Haber of LAUSD told City News Service.  Los Angeles City Councilman Bob Blumenfield said Wednesday he has requested a report from the DPH on the details of plans to reopen schools amid the COVID-19 pandemic, which he criticized as being unclear thus far.  The councilman said he also wants the report from the DPH to include details on the plan to keep K-12 campuses mostly closed until November.  "I constantly get calls and messages from parents who have heard about some schools getting exemptions or campuses being opened and I have received only vague responses back from DPH on what's actually allowed and the metrics needed for reopening," Blumenfield said.  "I'm in no way saying `open all the schools' yet, but with the digital divide and learning-gap issues many students face, parents need some clarity now about the next steps."  The average attendance rate at LAUSD schools for online learning has been lower compared to in-person instruction rates as of last year, Beutner said. In school year 2019-2020, the average attendance level was at 97%, but online learning attendance is at 93.4%. However, as of Wednesday, the attendance level for that day was 98.5%.  A movie titled "A Trusted Space" about the work teachers have done during the pandemic will debut later this month, Beutner said. The documentary looks at the struggles teachers and students have had to recon during the pandemic, he said.