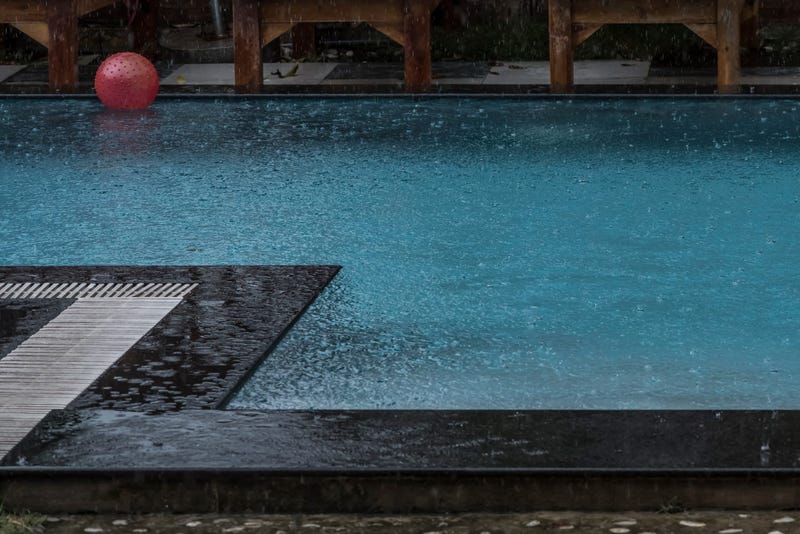 LOS ANGELES (CNS) - Rain that began Sunday afternoon in Southern California and carried on through the night made for a soggy morning today, further complicating matters for people trying to reach their holiday destinations or wrap up their Christmas shopping.

The rain was light at first Sunday afternoon but turned heavier as the day progressed. By Monday morning, there were scattered reports of flooded streets in areas such as the San Fernando Valley and Palos Verdes peninsula.

A flood advisory was issued for Los Angeles County overnight due to the intensity of the rain, but when the precipitation began easing, the National Weather Service canceled it around 6 a.m.

"However, due to the heavy rain which fell overnight, there will likely be some residual ponding of water on area roadways and lingering flooding of low-lying areas and intersections ...," according to the NWS. "Motorists should be prepared to encounter flooded roadways and allow extra time to reach their destinations."

Around 1:15 a.m., flooding forced the closure of the Burbank Boulevard onramp to the westbound Ventura (134) Freeway, but the ramp was reopened about an hour later. Flooding was also reported on the transition road from the eastbound Ronald Reagan (118) Freeway to the southbound San Diego (405) Freeway.

Malibu Canyon Road was shut down about 5 1/2 hours Sunday night through early Monday morning just south of the Malibu Canyon Tunnel due to a mud and rock slide caused by rain.

By the time the storm moves out, accumulations could reach 1 1/4 inches in the Los Angeles Basin, with more in the San Fernando and Santa Clarita valleys, NWS Meteorologist Carol Smith said.

The rain was forecast to taper off to showers in the afternoon with a chance of thunderstorms that could produce small hailstones. Forecasters said the brunt of the storm system had moved off to the east by mid-morning, but the area could still see "off and on showers and possibly an isolated thunderstorm or two as colder air aloft moves in from the north."

The rain also led to abnormally high numbers of power outages across the area.

"Crews are responding and working as quickly and safely as possible to restore your power," the Los Angeles Department of Water and Power posted on its Twitter account late Monday morning. "We are experiencing higher than normal outages, so estimates will vary. We thank you for your patience."

The DWP's website showed outages scattered across the area, most notably in Eagle Rock, where more than 900 customers were affected, and Venice, where roughly 50 customers had no power. At midday, Southern California Edison reported nearly 2,100 customers affected by outages in Los Angeles County, and about 300 more in Orange County.

After a break on Tuesday, a cold air mass is expected to move over the area Wednesday, leading to a colder rainstorm and lower snow level. That rain could potentially begin Wednesday morning, but it is more likely to start Wednesday afternoon and continue into Thursday, Smith said.

The snow level could drop to 4,000 feet or lower during that storm, she said.