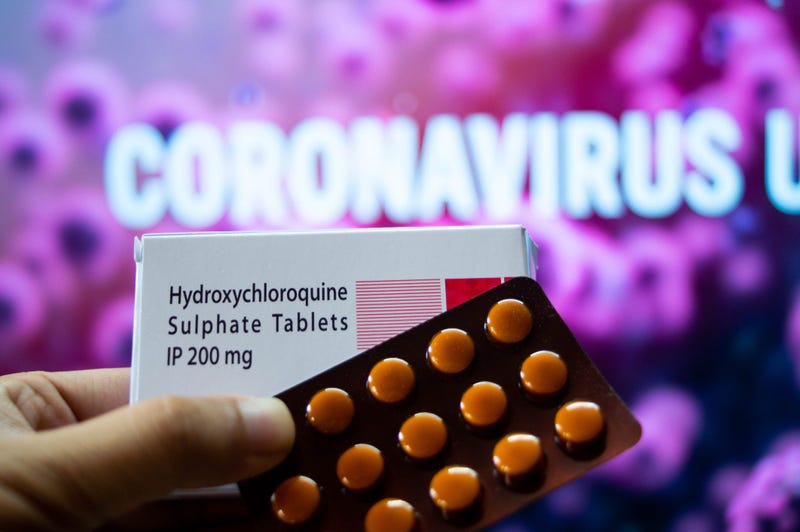 Dr. Stella Immanuel recently spoke before the Supreme Court and gave a press conference in Washington D.C. with other members of a group called America's Frontline Doctors.

“I was very impressed with her and other doctors that stood with her,” Trump said Wednesday before leaving the White House for Texas, according to Associated Press.

Trump lashed out at social media companies for labelling her comments misinformation and removing the video that featured her: “I was very impressed by her. I know nothing about her, I had never seen her before, but certainly you could put her up and let her have a voice. So what they did is they took down their voice. Now, they seem to never take down the other side. They only take down conservative voices.”

“And with hydroxy, all I want to do is save lives,” Trump added.

It's now being reported that the group promotes the largely unproven use of hydroxychloroquine for the treatment of COVID-19.

The “White Coat Summit,” was hosted by the Tea Party Patriots, a right-wing nonprofit group that has supported protests against lockdown measures in several US states during the first spike in the pandemic.

“Nobody makes money off a cheap, generic drug like HCQ” @stella_immanuel (The COVID Doctor)Big Pharma & Dr. Fauci do NOT want you to see this video. Download, SHARE & spread this everywhere before they take it down. #HCQWorks #COVIDCure pic.twitter.com/Be4xnYSk3P

Immanuel claimed she had treated hundreds of patients with coronavirus with hydroxychloroquine. “Nobody needs to get sick,” Immanuel said. “This virus has a cure.”

Despite appearing in D.C. to lobby Congress on Monday, Immanuel has said publically that U.S. government is run in part not by humans but by “reptilians” and other aliens.

‘I thought her voice was an important voice, but I know nothing about her.’ - @realDonaldTrump on the woman whose medical opinions he & other Repub dingbats viralized in the midst of COVID.‘Dr’ Stella Immanuel on alien DNA, ‘mixing human beings with demons’ and McDonald’s toys. https://t.co/MScIxLDfVs pic.twitter.com/fv6CSHvwCj

Immanuel, a pediatrician, and a religious minister has made many controversial statements over the years. She has posited the idea that sex dreams involving demons cause illnesses and that alien DNA is used in medication, The Daily Beast reported.

Hydroxychloroquine performed pretty poorly in several early clinical trials as a treatment for the virus---and as a result, it was largely dismissed as an option.But a brand new study has shown promise that hydroxychloroquine could, in fact, lessen the risk of death for COVID patients.Dr. Steven Kalkanis is the CEO and chief academic officer of the Henry Ford Medical Group in Detroit.

CLICK TO LISTEN TO THE INTERVIEW WITH DR. KALKANIS

The hydroxychloroquine video was shared on social media, with Breitbart promoting it.