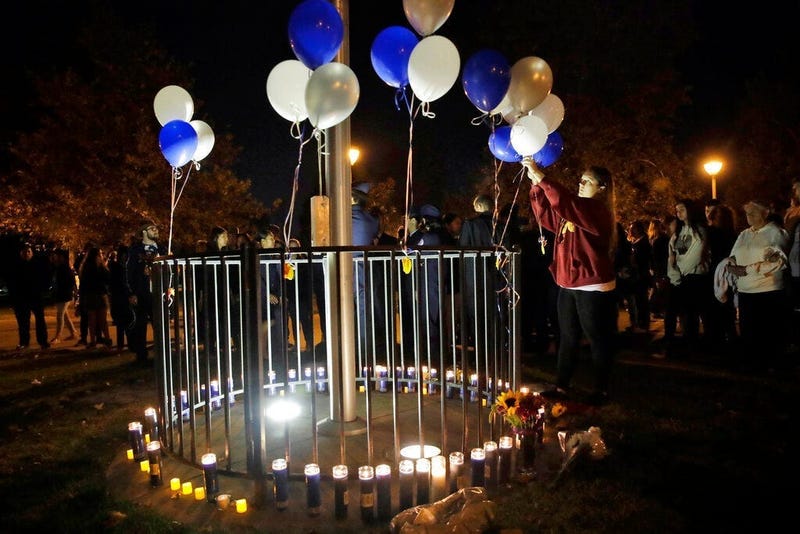 Just a day after six victims were injured, and two died, in a school shooting at Saugus High School in Santa Clarita Thursday, counseling has been made available for students and their families.

Two victims have died, a 14-year-old male and 16-year-old female, according to authorities in a Thursday morning press conference.

Memorials in honor of the victims and survivors are growing.

Amber says this whole thing doesn't feel real and says one of the emotions she feels right now is anger.

Counselors will be on hand Friday at Grace Baptist Church (located at 22833 Copper Hill Drive) from 8:00 a.m. this morning to 4:00 p.m. this afternoon.

A growing memorial at #CentralPark in #Saugus this morning. This is just down the street from #SaugusHighSchool, where a deadly #schoolshooting took place early yesterday morning. @KNX1070 pic.twitter.com/z1nd76CrWc

Several more distraught friends of a teenage girl who died in the #SaugusHSShooting...leave the hospital in #Newhall. They were in tears as they walked down the sidewalk. @KNX1070 pic.twitter.com/1Y1nGhsFKm

One of the victims is the suspect, according to authorities during a Thursday morning press conference. Authorities said there were a total of six victims who were promptly triaged and transported to local hospitals.   Among those that were transported was the suspect in grave condition, 16 years of age and a student of the school. Authorities said the suspect shot himself in the head in the quad of the high school. The shooting occurred in the quad of the high school.

Authorities said a search warrant was issued to the suspect's home. The suspect's birthday was today and he allegedly used a 45-caliber semiautomatic pistol.

He says his son called him right after the shooting and he told his son to run.. which he did off-campus.

Skiba says his daughter ran to the band room and locked the door and told everyone inside what was happening.

He says the band teacher told him his daughter was a hero.

The suspect is in custody and is being treated at a hospital, according to LASD Sheriff Alex Villaneuva who spoke to KNX 1070 Thursday morning.

All lockdowns have been lifted.