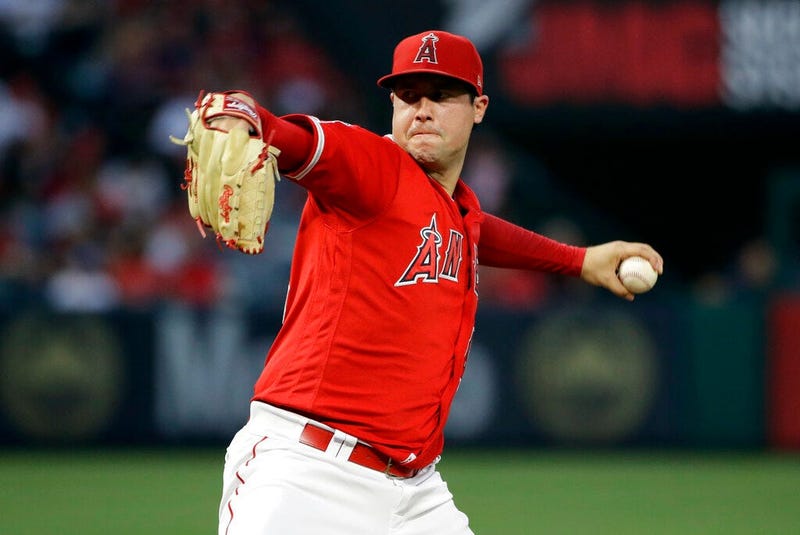 ARLINGTON, Texas (AP) — The family of Los Angeles Angels pitcher Tyler Skaggs says it was startled to learn that a club employee "may" be part of the investigation into the 27-year-old's death from an accidental drug overdose.

A Texas coroner said in a report made public Friday that Skaggs died after choking on his vomit with a toxic mix of alcohol and the powerful painkillers fentanyl and oxycodone in his system.

Skaggs was found dead in his hotel room in the Dallas area July 1 before the start of what was supposed to be a four-game series against the Texas Rangers. The first game was postponed before the teams played the final three games.

"That is completely out of character for someone who worked so hard to become a Major League Baseball player and had a very promising future in the game he loved so much," the family said less than two hours after the coroner's report was made public. "We will not rest until we learn the truth about how Tyler came into possession of these narcotics, including who supplied them."

The statement thanked police in the Dallas suburb of Southlake for the investigation and said they "were shocked to learn that it may involve an employee of the Los Angeles Angels." The family said it hired Texas attorney Rusty Hardin to try to determine how Skaggs obtained the drugs.

Angels general manager Billy Eppler cited the investigation when declining to comment on the possibility of an employee being involved, and whether that person was still with the club.

"Everyone in the organization wants facts, which is why we are actively cooperating with an investigation," Eppler said before the Angels hosted Boston. "We miss Tyler every day. That clubhouse misses him every day.

"Nothing we learned today changes those feelings. Not one bit. But this is like a shot to our core. And it brings back a lot of pain for that tragic day."

MLB spokesman Pat Courtney said the league had been unaware of the allegation and planned to investigate.

The death rocked baseball shortly before the All-Star Game and laid bare the emotions of Angels manager Brad Ausmus, star outfielder Mike Trout and fellow left-hander Andrew Heaney , his best friend on the team, along with the rest of his teammates.

The Angels closed their clubhouse to reporters Friday, just as they did for the first game back in Texas after Skaggs died. Once again, Eppler and Ausmus were the only club personnel to address the media before the game, this time at home against Boston.

"I was a little surprised by it because I had no prior notice but frankly for me it doesn't change — we lost a friend, a teammate and we still miss him," Ausmus said. "There's not many days that go by where myself or others don't think of Tyler."

Heaney said after the Angels' 7-6 loss to the Boston Red Sox in 15 innings Friday night that the news did catch him off guard.

"It hurts, the circumstances around it. We don't have answers. Nobody has answers," he said. "It makes you think about the negative side of it and not being reminded of all the positive things. In that sense it's tough. ... Every day I think of him, it's always something positive."

Skaggs wouldn't necessarily have been subject to testing by MLB for the drugs found in his system. Players on 40-man rosters are tested for drugs of abuse only if the player-management joint treatment board finds reasonable cause, if a player has been found to have used or possessed a drug of abuse, or if a player is subjected to testing under a treatment program.

"We are heartbroken to learn that the passing of our beloved Tyler was the result of a combination of dangerous drugs and alcohol," the family said.

The Southern California native was drafted by the Angels in the first round in 2009 and made his big league debut with Arizona three years later after being traded.

Skaggs returned to the Angels in 2014 and missed all of the next season recovering from reconstructive surgery on his left elbow. He also spent more than three months on the disabled list in 2017 with a right oblique muscle strain, and almost another two months last year with abductor muscle strains.

Ausmus said Skaggs hadn't been complaining of any physical pain before he died, but said he "would be the last guy he would come to because he wants to stay in the rotation."

"You read about opioids being an issue culturally and of course post-surgically for athletes," Ausmus said. "I can't say I have ever seen it or notice it being a problem, not that I am qualified to recognize the signs. I would say no. I haven't really seen it."

The day before he died, Skaggs posted a picture on Instagram of him and the Angels in cowboy hats and other western clothing outside their plane. Skaggs organized the effort because the club was stopping in both major league cities in Texas.

The first game after Skaggs died was played without music or the usual in-game promotions for the Rangers, who painted his number "45" on the back of the mound at Globe Life Park. Ausmus and his players fought back tears talking about the death with reporters.

"I said at the time it didn't matter to me what the cause was," Ausmus said Friday. "We lost someone way too early who we cared about and there is a huge void that is a result. Those facts remain the same."

In their first home game after Skaggs died, the Angels beat the Seattle Mariners 13-0 on a combined no-hitter from Taylor Cole and Félix Peña. All the LA players were wearing Skaggs' number and covered the mound with their jerseys after the victory. It was a day before what would have been Skaggs' 28th birthday.