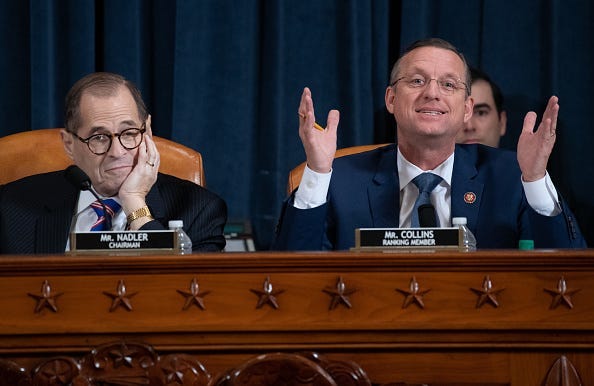 The House Judiciary Committee is expected to announce the date for next week's proceedings which is likely to include testimony from Democrat and GOP staff attorneys on the House Intelligence Committee giving their findings on the ongoing investigations.

It's reported that next week there could be votes on the articles of impeachment which will likely to include:

Opening remarks Wednesday were made by Chairman Jerrold Nadler and others.

Rep. Doug Collins of Georgia, the top Republican on the House Judiciary Committee, called the hearing a "sham."

The hearing will include testimony from constitutional law experts.

Karlan, Feldman and Gerhardt all told the committee President Trump's actions in the Ukraine affair would justify the impeachment, as the Constitution has dictated, according to a story from NPR Wednesday.

"The President demanded that the newly-elected Ukrainian president, Volodymyr Zelensky, publicly announce investigations into a political rival that he apparently feared the most, former Vice President Joe Biden, and into a discredited theory that it was Ukraine, not Russia, that interfered in the 2016 presidential election.  To compel the Ukrainian President to do his political bidding, President Trump conditioned two official acts on the public announcement of the investigations:  a coveted White House visit and critical U.S. military assistance Ukraine needed to fight its Russian adversary," the report said.

Schiff was on the KNX In-Depth show Tuesday afternoon to discuss the newly released report:

Monday, Republicans released a report of their own, citing that "evidence presented does not prove any of these Democrat allegations, and none of the Democrats’ witnesses testified to having evidence of bribery, extortion, or any high crime or misdemeanor."

"The Democrats’ impeachment inquiry is not the organic outgrowth of serious misconduct; it is an orchestrated campaign to upend our political system. The Democrats are trying to impeach a duly elected President based on the accusations and assumptions of unelected bureaucrats who disagreed with President Trump’s policy initiatives and processes. They are trying to impeach President Trump because some unelected bureaucrats were discomforted by an elected President’s telephone call with Ukrainian President Volodymyr Zelensky," the report from the Republicans says.

Democrats have been saying that President Trump allegedly abused presidential powers during his interactions with Ukraine -- by using aid to ask President Volodymyr Zelenskiy to investigate not only former Vice President Joe Biden and his son, Hunter, but also investigate meddling in the 2016 election.

While in London this week for meetings with NATO, Trump called out the Democrats, saying the impeachment push was “unpatriotic."

Recently, the White House said it wouldn't appear at the Wednesday hearing.

Breaking News: The President of Ukraine has just again announced that President Trump has done nothing wrong with respect to Ukraine and our interactions or calls. If the Radical Left Democrats were sane, which they are not, it would be case over!

The Do Nothing Democrats get 3 Constitutional lawyers for their Impeachment hoax (they will need them!), the Republicans get one. Oh, that sounds fair!

Trump has maintained he has done nothing wrong.

“I think it's a bad thing for our country," Trump said in various media reports.