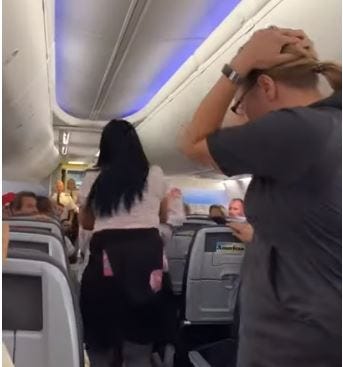 Just as a flight was about to take off from Miami to Los Angeles, an American Airlines passenger was captured on video violently yelling, hitting and throwing a computer at her boyfriend for allegedly looking at another woman.

The video has been viewed over four million times. Passengers can be heard screaming as the woman violently flings her computer at her boyfriend, only to hit the flight attendant in the back of the head.

The video starts when two flight attendants attempt to calm the woman down, even telling her to no avail, that there's a young child seated behind her.

American confirmed there was a “dispute” on the flight from Miami to LA, telling New York Post that, “Law enforcement was requested, and both passengers were removed from the aircraft.”