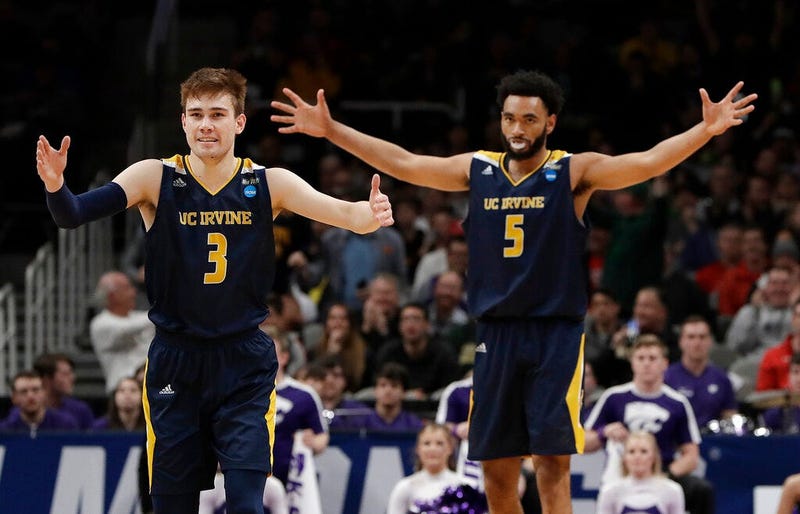 Let the celebration begin! Ecstatic #UCIrvine fans at the alumni center watch the final seconds tick off the clock, in the #Anteaters 1st ever win in the #NCAATourney. @KNX1070 pic.twitter.com/dp9AggTcOx

The 13th-seed Anteaters will play again Sunday against the winner of Friday afternoon's game between Wisconsin and Oregon, with a spot in the tournament's Sweet Sixteen on the line.

The Anteaters qualified for the tournament for the second time with a 92-64 victory over Cal State Fullerton in the Big West Conference Tournament final Saturday night, extending their school-record winning streak to 16 games and improving to 30-5, increasing its school record for victories in a season.

Ya gotta believe! #UCIrvine upsets #KansasState in the 1st round of the #NCAA Tournament. This was a watch party on the #Irvine campus. @KNX1070 pic.twitter.com/x2dQcQnxsi

"We've been close to making it this far a few times, but we accept that it's hard to get here and that's one of the things that makes it so satisfying, not just for our players but for our fans and our community," UC Irvine coach Russell Turner said prior to Friday's game.

In a conference that has only been represented in the NCAA tournament by the conference tournament champion each year since 2006, the Anteaters have been one victory away from advancing to the tournament six times, including in 2017 and 2018.

UC Irvine's other NCAA Division I men's basketball tournament appearance was in 2015 when it was the 13th seed in the East Regional and lost to fourth-seeded Louisville, 57-55, in a game the Anteaters led in the final minute.

news
Broadway shows to open Sept. 14; tickets go on sale Thursday
news
Woman sets home on fire, then sat in lawn chair to watch
sports
Jacob deGrom 'feeling good,' could return this weekend
news
Survey shows how the pandemic may have hit younger adults harder than their parents
sports
Patrick Ewing hid on team bus and 'broke down' when he couldn't play during 1999 NBA Finals
music
The Reel Buzz: First photos of ‘Game of Thrones’ prequel series ‘House of the Dragon’