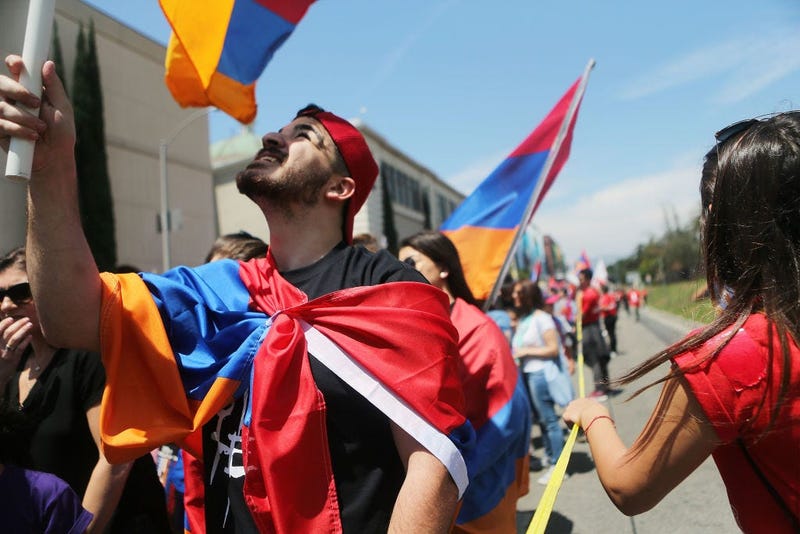 Thousands of people will march through Hollywood and the Mid-City area today to mark the 104th anniversary of the Armenian Genocide, again calling on Turkey -- and the United States -- to officially recognize that it occurred.

Turkey has refused to recognize the killings of 1.5 million Armenians beginning in 1915 as a genocide. Americans presidents have also declined to do so, calling the deaths at the hands of the Ottoman Empire an atrocity, but not a genocide.

People are getting ready to march in #Hollywood on the 104th anniversary of the #ArmenianGenocide. They want the United States & Turkey to acknowledge the massacre. @KNX1070 pic.twitter.com/Sqa2sbQXOJ

VIEW THE MAP BELOW:

At 1 p.m., the Armenian National Committee of America Western Region and a variety of other groups will stage a march outside the Turkish Consulate at 6300 Wilshire Blvd. Organizers said the event is staged "to demand justice for the Armenian Genocide" by "bringing Armenian demands directly to Turkey's official government representative in Los Angeles."

Motorists should anticipate street closures and delays throughout the day in both areas.

The Armenian genocide began in 1915 and resulted in the deaths of as many as 1.5 million Armenians in a campaign blamed on Turkey's Ottoman government. While the genocide has been chronicled by historians, who often view it as having been ethnic cleansing, Turkey has denied it occurred, saying the deaths of Armenians was a function of the chaos of World War I, which also claimed Turkish lives.

More than 200,000 people of Armenian descent live in Los Angeles County, making the Southland home to the largest Armenian community outside of Armenia.

Despite calls by some legislators -- most notably Rep. Adam Schiff, D- Burbank -- for the federal government to formally recognize the genocide, U.S. presidents have long refused to do so. President Donald Trump last year denounced the deaths as "one of the worst mass atrocities of the 20th Century" but failed to use the term "genocide."

Former President Barack Obama, a Democrat, also failed to recognize the genocide during his eight years in office, despite indications during his original campaign that he would do so.