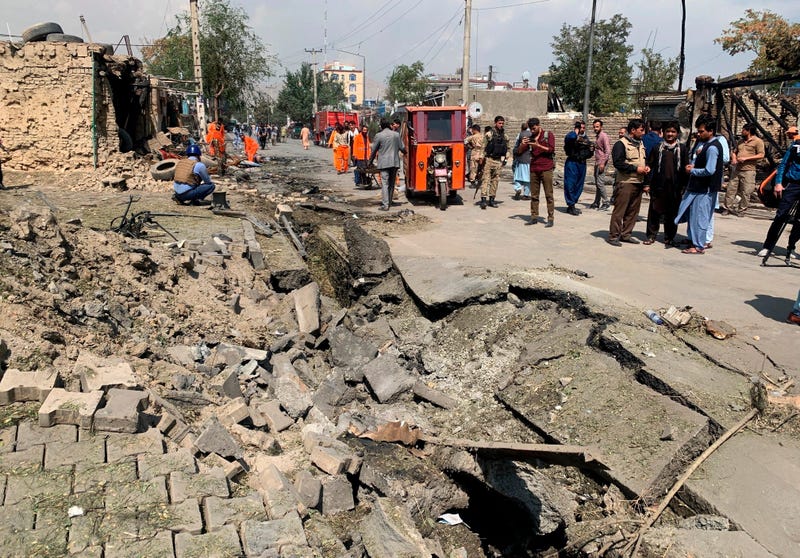 Photo credit Afghan security personnel and Municipality workers work at the site of an explosion in Kabul, Afghanistan, Wednesday, Sept. 9, 2020. Spokesman for Afghanistan's Interior Ministry said the bombing that targeted the convoy of the country's first vice president on Wednesday morning killed several people and wounded more than a dozen others, including several of the vice president's bodyguards.(AP Photo/Rahmat Gul)
By The Associated Press

KABUL, Afghanistan (AP) — A bombing in the Afghan capital on Wednesday targeted the convoy of the country’s first vice president, killing 10 people and wounding more than a dozen others, including several of the vice president’s bodyguards, the Interior Ministry said.

No one immediately claimed responsibility for the bombing and the Taliban quickly denied they were behind the attack.

Saleh, who is also Afghanistan’s former intelligence chief, said in his first television appearance immediately after the attack that he was fine and had sustained only slight burns. He appeared in the TV footage with bandages on one hand.

“Me and my younger son who was also with me are fine,” Saleh said in the footage. “I have slight burns on my face and hand from the wave of the blast. I don’t have exact details right now, but I apologize to those who suffered casualties and those who lost their property in the attack.”

His spokesman, Razwan Murad, called the attack a “vicious terrorist attempt” on Saleh's life. The roads in the vicinity of the bombing were closed off.

The Interior Ministry says the bomb went off as Saleh’s convoy was passing through a section of Kabul with shops that sell gas cylinders for use in heating homes and cooking. The blast ignited a fire that set ablaze a number of the shops.

The explosion left behind a scene of destruction — at least 10 shops were smoldering in the aftermath of the explosion that had also shattered windows of dozens of nearby homes, some with doors hanging off their hinges. Cars were wrecked and debris was scattered around.

Taliban spokesman Zabihullah Mujahed was quick to deny the insurgents were involved in any way, saying that “today’s explosion in Kabul has nothing to do with the Mujahedeen of the Islamic Emirate,” as the Taliban call themselves.

Both the insurgents and the Islamic State group are active in Kabul where tensions are also high ahead of the expected start of negotiations between an official Afghan delegation and the Taliban.

Washington has been ramping up pressure on both sides to get the talks underway. America's peace envoy Zalmay Khalilzad is in Qatar, where the Taliban maintain a political office, trying to get the negotiations started.

The negotiations, known as intra-Afghan talks, were envisaged as part of a peace deal the U.S. signed with the Taliban in Qatar in February to end America's longest war. At the time, the talks were cast as Afghanistan's best chance at peace after decades of conflict.

Kabul's peace negotiation team is waiting in the Afghan capital to travel to the Qatari capital of Doha for the talks but delays have been relentless. In recent days, Washington, officials in Kabul and the Taliban have all indicated that they could get under way imminently.

The U.S.-Taliban deal allows for the exit of American soldiers from Afghanistan. However, U.S troop pullout, which has already begun, does not hinge on the success of intra-Afghan talks but rather on commitments from the Taliban to fight against other militant groups — such as the Islamic State group — and to prevent Afghanistan from being a staging arena for attacks against the U.S. and its allies.